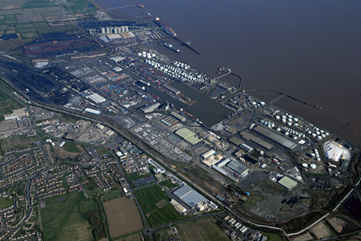 The Project was chosen for the Clean Maritime Demonstration Competition, which is sponsored by the UK Department for Transport and conducted in collaboration with Innovate UK.

At the Port of Immingham, which handles the largest volume of cargo in the United Kingdom, the technological and economic feasibility of producing, supplying, and using hydrogen will be evaluated in order to develop a hydrogen-based decarbonization model for the port with the goal of developing a commercialization strategy in the future. This section will examine the potential for hydrogen production, transportation, and storage, as well as as a substitute fuel source for diesel and heavy fuel oil used in transportation, via conversion to fuel cells. Additionally, the development and evaluation of possible hydrogen applications for port cargo handling machinery will be conducted.

Uniper, Siemens Energy, ABP, and TTUK will form a four-company coalition to carry out the project. Uniper is responsible for project management and technical feasibility. The objective is to generate green hydrogen utilizing renewable energy and Siemens Energy’s cutting-edge water electrolysis equipment. ABP will use its expertise obtained through operating 21 ports in the United Kingdom, including Immingham, to promote the use of hydrogen at ports.

Since September 2020, the Toyota Tsusho Group has been studying a concept of local hydrogen generation for local hydrogen consumption at the Port of Los Angeles in the United States, with the goal of converting equipment to fuel cells. The organization intends to conduct research into the development of infrastructure, such as port facilities and hydrogen fueling, as well as the volume of GHG emissions reductions, using its expertise in port decarbonization.

The feasibility study will take place between September 2021 and March 2022, and commercialization, including finance, will begin in 2022, with the goal of commercialization and production of 20 MW of green hydrogen for use at the Port of Immingham by 2025.

The Toyota Tsusho Group is accelerating the transition to a carbon-neutral society by advancing enterprises that cut GHG emissions across the industrial life cycle and promoting carbon-neutral activities.