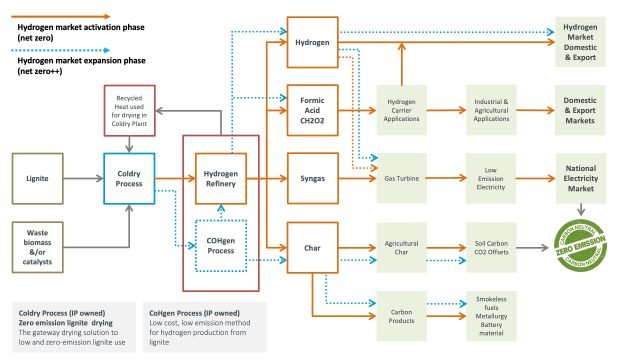 A hydrogen refinery with zero emissions is currently being planned and developed by Environmental Clean Technologies (ECT) in Victoria’s Latrobe Valley.

In the Latrobe Valley area, ECT is developing a groundbreaking new project that will produce clean hydrogen, agricultural char, and other valuable products with a net-zero emission footprint.

Core technology from ECT’s Coldry system will enable an integrated operating plant to process raw materials. Incoming lignite and biomass streams will be dewatered, dried, and fed into the thermochemical decarbonization process (partial pyrolysis), which produces two major product streams: a hydrogen-rich syngas, which also contains other valuable industrial gases for downstream use, and a char product, which contains most of the incoming carbon (in solid form).

An integrated downstream application within the project utilizes the hydrogen-rich syngas for hydrogen, formic acid, and electricity generation.

An important industrial chemical, formic acid has a wide range of applications. Carbon dioxide (CO2) and hydrogen (H2) are used to produce a hydrogen-carrier, which in turn uses some of the CO2 emissions generated during the manufacturing process to produce a valuable product. As a preservative and antibacterial agent for livestock feed, it is Asia’s largest and fastest-growing market for hydrogen carriers.

Australia’s largest producer of agricultural char for soil health and soil CO2 sequestration, and a significant manufacturer of hydrogen, formic acid, and emission-free electricity will emerge from the first stage of this project.

The Project is based on a commercial-scale hydrogen refinery, which is expected to create significant jobs, training, and research opportunities in the region.

Recent months have seen major federal and state government funding initiatives in the form of grant or funding programs established to help stimulate technology-driven climate transition and activate nationwide hydrogen industry development. ECT is currently preparing submissions for a number of these programs in order to incorporate the proposed Project.

There must be a multi-faceted approach to deal with the renewable hydrogen barrier, with lignite-derived ‘clean’ hydrogen combined with biomass proposed in the Project as an example. Allowing for the development of affordable hydrogen production capacity in a timely manner will help activate the industry in Victoria by justifying the deployment of infrastructure while new solutions to reduce renewable hydrogen technology’s costs are developed.

It is necessary to capture and store significant amounts of carbon dioxide (CO2) to meet the low or zero-emission requirements of conventional hydrogen production from lignite.

The proposed Hydrogen Refinery by the Company uses Victoria’s abundant lignite and biomass resources to produce hydrogen at a significantly lower cost than renewable hydrogen. Breakthrough net-zero hydrogen extraction from lignite does not necessitate the use of CCS and the associated costs, unlike other methods.

While primary biomass demand is not affected by waste biomass utilization, lignite serves as the reliable baseload of process feedstock. To ensure that biomass emissions generated by this Project are future-proofed against possible legislation changes in this area, soil CO2 sequestration offsets will be used to offset the emissions.

Typically, CO2 extraction from the process gas stream, compression, liquefaction, transportation, and storage in geologically suitable underground locations are the steps in conventional CCS. Even though the conventional approach to CCS is well-understood technically, it is time-consuming and costly.

Conventional carbon capture and utilization (CCS) methods are not utilized, instead a net-zero emission route is taken in the Project.

To achieve net-zero hydrogen production from lignite and biomass, the project calls for an integrated set of applications to consume the majority of available waste energy outputs and recycle that energy back into the gateway Coldry process. This results in a highly efficient platform.

It is expected that the first phase of financial and commercial feasibility, site preparation, and engineering design and development will begin in the first half of CY2022, followed by a financial investment decision (FID).