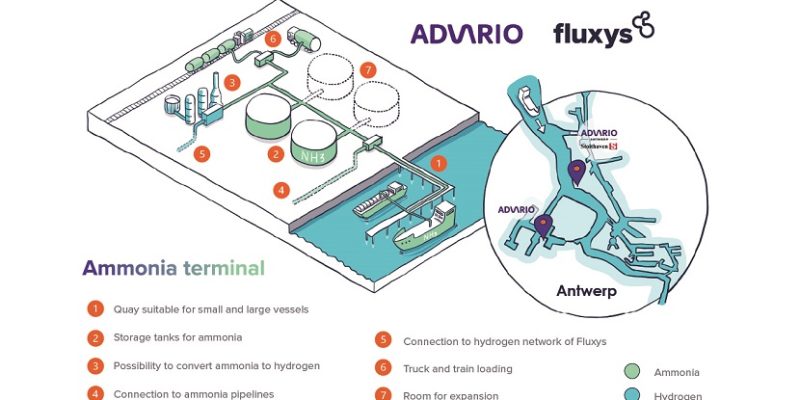 For the import of green ammonia, Fluxys plans to construct a terminal in the port of Antwerp. This was disclosed by the operator of the Belgian gas network. It would require “hundreds of millions” of euros in investment.

Ammonia is being considered as an alternative to fossil fuels, among other things. Hydrogen can be created using solar and wind energy, which can then be combined with airborne nitrogen to create ammonia. In regions with lots of light and wind, that green ammonia may be created and then moved elsewhere.

By constructing an ammonia terminal in the port of Antwerp, Fluxys hopes to transform Belgium into a hub for the import and transit of green ammonia across Europe. It is collaborating with logistics specialists Advario and Stolthaven to achieve this. The terminal could provide corporations with direct storage and transit services via rail, road, ship, or pipeline. The ammonia might potentially be transformed back into hydrogen with an extra installation.

A spokeswoman for Fluxys stated that a decision would be made “in the next months” about the terminal. The firms want to have it functioning by 2027. It would require “hundreds of millions” of euros in investment.

Ammonia is more cost-effective and easier to store and transport in large quantities than hydrogen due to its higher energy density. The chemical compound can also be used directly as fuel by ships.

Additionally, the molecule may be changed back into green hydrogen, which can then be used to run engines, fuel cells, and turbines without producing any direct emissions of carbon dioxide, according to Fluxys.

US: Bosch to invest $200M in fuel cell production