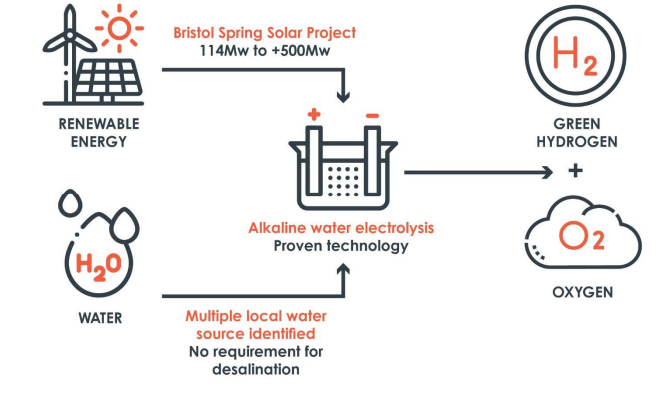 This technology was chosen due of its reduced price and greater technical durability compared to other accessible options. In addition, the Company has inked a Memorandum of Understanding (MOU) with global experts in hydrogen production, Nel Hydrogen and ENGV, to support its hydrogen production plan.

Managing Director Mike Young commented, “The global transition towards green hydrogen is evolving at an ever-increasing pace particularly in light of current geopolitics. What is really encouraging is that this will accelerate the evolution of the green hydrogen industry, which is already approaching parity on cost with diesel powered haulage systems. Given these changes, we are accelerating the development of our Bristol Springs Project as we aim to become one of the first commercial green hydrogen producers in Australia. The MOU with Nel and ENGV ensures that our green hydrogen strategy is carried out in the most efficient manner”.

An electrolyser is a device that employs the electrolysis process to separate water into hydrogen and oxygen gases. When electricity is derived from renewable sources such as solar, wind, and hydro, green hydrogen is created. The hydrogen gas can be compressed or liquefied for storage, and because it is an energy carrier, it can be utilized to power any hydrogen fuel cell electric application. Additionally, oxygen gas can be captured for other industrial or medical applications.

Multiple characteristics were evaluated, including the timeframe for initial hydrogen production, initial plant size and scalability, input power characteristics, electricity cost, and the rate of technological improvement of the hydrolyser.

From this assessment five technologies were initially considered:

Only AWE and PEM were further evaluated because of their industry maturity and potential for commercial scale. Following this, AWE was identified as the preferred technology due to its reduced total cost and reliability in producing green hydrogen with a purity greater than 99.98%. As hydrolyser plants are modular, the Company is not locked into a certain technology in the event of future advancements by selecting AWE at this time.

AWE is a mature green hydrogen technology that has been commercially accessible at the MW scale for longer than other leading technologies, such as PEM. Consequently, it has the lowest cost per kW of installed capacity, the longest operating stability, and the longest plant life. The reduced price relative to PEM is partly attributable to the technological maturity and utilization of precious metals inside the PEM stack.

Recent developments in AWE technology provide pressurized electrolysers capable of supplying up to 30 barg of hydrogen with reduced minimum loads, allowing them to operate with intermittent power supply with careful management.

To maintain the efficient running of the AWE facility, the company is also evaluating methods to eliminate electrical interruptions. Consequently, the advantage of PEM for faster response time to fluctuating energy supply is diminished. The planned green hydrogen production facility will include electrical systems, electrolyser stacks (series of cells), gas/liquid separation, hydrogen purification, and export systems.

The Company has signed a memorandum of understanding with Nel and ENGV to pursue the hydrogen investigation. This entails advancing the development of the green hydrogen production plant, compression and storage, and market distribution. ENGV will supply the integration services, while Nel will provide the hydrogen technology solutions.

Nel is a global, hydrogen-focused firm that provides ideal solutions for the production, storage, and distribution of hydrogen derived from renewable energy. Nel provides enterprises in the energy and gas industries with superior hydrogen technologies. Nel’s origins date back to 1927, and since then it has had a distinguished history of hydrogen technology development and constant improvement. ENGV has a reputation for executing high-quality, complicated projects on schedule and within budget in Australia, where it is a leader in the implementation of hydrogen technologies. Existing ENGV clients include major Australian natural gas corporations and global OEM technology suppliers.