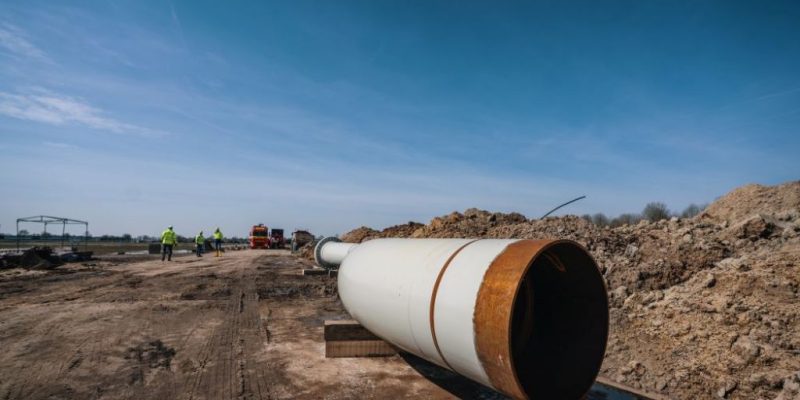 The building of two parallel pipes is a first for Gasunie: it is the first pipeline dedicated to hydrogen transmission. But, Johan continues matter-of-factly, “whether it’s a natural gas pipeline or a hydrogen pipeline, the way of construction, the technology we use, the material for the pipes, it’s all precisely the same.”

Gasunie is presently installing a new natural gas pipeline between the GETEC PARK.EMMEN (GPE) site and the GZI Next energy hub in Emmen’s Bargermeer industrial park (a collaboration of energy companies, government bodies, and knowledge institutions). A new pipeline is being installed to connect the facility to the high-calorific natural gas pipeline since GPE is obligated to convert to a different type of gas than the low-calorific Groningen gas by October 1st of this year. The economical and practical benefits of constructing both natural gas and a hydrogen pipeline are realized through synergy. Given that the proposed electrolyzer on the GZI site has yet to be finished, and the link to the hydrogen network in the northern Netherlands will also take place at a later date, the installation of the hydrogen pipeline is a case of foresight. Although hydrogen isn’t scheduled to be accessible until 2024, GPE is already paving the ground for the transition.

Technically, the two structures are identical

The pipelines are positioned underground using horizontal directional drilling (HDD), after which the numerous bores are joined. The pipes are identical in every way: they’re built of the same material, have the same welded joints, and are coated in the same way. Although the building of a hydrogen pipeline is novel, the pipeline itself is technically equivalent to that of natural gas. The main difference is the type of valve used: whereas present valves prevent natural gas from leaving, they do not prevent hydrogen molecules from escaping since they are considerably smaller than natural gas molecules.

What’s it like working on a hydrogen pipeline project for Johan? ‘I actually prefer creating pipes; it’s a lot more fun than, say, building a station.’ So I believe it’s fantastic that we’re developing a hydrogen pipeline,’ Johan exclaims.

The project in Emmen is doing well: because of the local sandy soil, drilling is simple. Drilling progress is even slightly ahead of plan. ‘The only issue we’ve run into is a lack of material,’ Johan continues, ‘which is a common problem these days.’ For example, two valves will be delivered late. ‘We’re now laying the pipelines, and the valves will be fitted separately afterward.’

Apart from hydrogen, this project has a lot to offer Johan, a tech enthusiast. ‘It’s fantastic that we can utilize a test technique that differs from the NEN3651 standard in this project.’ Gasunie will have to bury a segment of these pipes beneath Emmen’s four-lane bypass. For such crossings, the standard demands that more pressure is applied during testing. ‘As a result, you’ll have to test this area independently, which will add to the contractor’s workload.’ We avoid this by putting these welds through two ultrasonic tests.’ If there is no deviation, instead of the testing section by section, you may test the complete pipeline route under pressure in one go. Ultrasonic testing is more efficient, quicker, and safer than traditional testing. ‘From my academic background, I just find it really exciting to deal with such an approach,’ Johan explains.

What role will our ammonia plant play in the energy transition?

Ammonia is simpler to transport than hydrogen, especially over long distances. Because hydrogen will be a critical component of our future energy system, Gasunie is building the ACE Terminal, an ammonia import terminal. This terminal is being built in the Maasvlakte region of the Port of Rotterdam in collaboration with Vopak and HES International. ‘The notion of employing ammonia as a hydrogen transporter is gaining traction,’ says Joost de Ruijter, a hydrogen import company developer. We will soon be able to make a big contribution to the energy transition by establishing the ACE Terminal immediately.’

Getting hydrogen on the road

Green hydrogen, or hydrogen produced with green electricity, offers versatility: we may utilize it as a fuel or feedstock right now, store it for later use, or convert it to green power depending on availability and need. ‘However, under atmospheric pressure and at atmospheric temperature, hydrogen has a low energy density,’ Joost adds. ‘You then need a lot of storage capacity for a small amount of hydrogen, which is inconvenient for long-distance transport.’ There are techniques to transfer hydrogen more effectively, such as cooling it to a very low temperature and converting it to a liquid. It becomes much denser and takes up less space as a result. Alternatively, the hydrogen might be bound to liquid organic hydrogen carriers (LOHC). At the present, however, we find that the variation in which hydrogen and nitrogen are joined to generate ammonia is receiving the most interest.’

‘A further benefit of ammonia as a hydrogen transporter is that it already has a market. Infrastructure and regulations are mostly in place already.’ Even the storage tanks have been installed. Gasunie will use its existing peak shaver (short-term LNG storage) capabilities at its Maasvlakte site. Currently, the two massive tanks can hold 78 million cubic meters of LNG. ‘We’re hoping to make the tanks appropriate for the storage of ammonia with relatively little alterations,’ Joost adds. This is a more efficient and long-term solution than constructing a whole new facility. Our ‘neighbor’ HES International provides us with quayside capacity for bigger seagoing vessels as well as more area for future growth. Our other partner, Vopak, currently operates many ammonia terminals throughout the world and has extensive expertise in technology and business. This team of collaborators is absolute gold!’

Ammonia commerce across the world

‘Together, we aspire to become Rotterdam’s ammonia import terminal,’ said the group. Joost keeps going. ‘We are currently in discussions with partners interested in generating ammonia using green hydrogen.’

These are parties from all over the world, from Chile to Namibia, Australia to Saudi Arabia, and wherever else where there is lots of suns and/or wind and room for energy farms. Tankers deliver the ammonia here, which will ultimately run on green fuel. Green ammonia will first pique the interest of markets that now rely on grey ammonia derived from natural gas, such as the fertilizer sector. However, the ultimate aim is to ‘crack,’ or break down, the ammonia into hydrogen and nitrogen once more. Our hydrogen network can then feed the hydrogen into the energy system.’

Contribution to the achievement of climate objectives

The Netherlands can create a significant amount of green energy on its own, but it is insufficient. Other nations are required to meet the climate targets. ‘We will soon be capturing solar and wind energy in locations where renewable energy is abundant and transferring it to places where it is scarce,’ says Joost. Infrastructure is required for this, and Gasunie excels at providing it. That is our contribution and role. “But,” you might object, “doesn’t this make us even more reliant on other countries?” Quite the opposite is true. The crisis with Russia has made us realize how reliant we are. You are not reliant on any one country or government since hydrogen comes from a variety of sources.’

Getting down to business

‘We want to utilize our existing LNG tanks to store ammonia,’ says the company. As soon as we receive client commitment, we will begin work on the basic terminal design. That’s what we’re currently working on. For example, in early May, we were in Rotterdam for World Hydrogen 2022. The summit and exhibition were both fully booked. We chatted with a lot of intriguing people there, and it’s evident that hydrogen and ammonia’s potential are hot issues. The ACE Terminal will be operating in 2026 if all goes well. And that’s only the start: more tanks, a transshipment facility, a cracking plant… the terminal has the potential to become a world-class center.’

Plug and Play establishes startup accelerator with focus on hydrogen