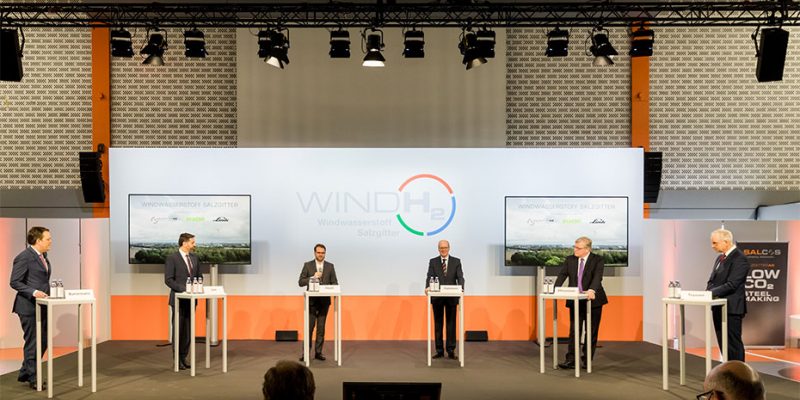 Salzgitter, Avacon and Linde have started operations for industrial hydrogen production based on electricity generated by wind power.

With the commissioning of Wind Hydrogen Salzgitter – WindH2, Germany’s only cross-sector project, green hydrogen will be produced in future with electricity generated by wind power on the site of the steelworks in Salzgitter.

Hydrogen generated from renewable sources will replace the carbon necessary for smelting iron ore. The three blast furnaces operated to date need to be gradually replaced by a combination of direct reduction plants and electric arc furnaces. Transforming steel production in this way could reduce the associated CO2 emissions by around 95 % over the period up until 2050.

Avacon, a member of the E.ON Group, operates seven newly built wind turbines with an output totaling 30 megawatts on the premises of Salzgitter. Salzgitter Flachstahl GmbH has installed two Siemens 1.25 megawatt PEM electrolyzer units on its plant site that are capable of producing around 450 m an hour of ultra pure hydrogen.

The cost of the entire project – building the wind turbines and the hydrogen plants, including integrating them into the existing supply network – amounts to around €50 million. The construction of the electrolyzer was subsidized by KfW.

“We are proud of our pioneering role in the industrial use of green hydrogen in the steel industry. As we have demonstrated with our SALCOS project, we are technically in a position to achieve significant CO2 reductions using hydrogen.”