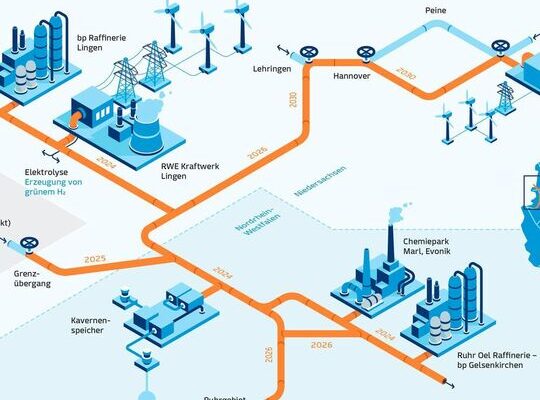 In the Transhyde joint project GET H2 for hydrogen storage, the partners RWE, OGE, Nowega, Rosen, Evonik, the University of Potsdam, DVGW, Adlares, and Meter-Q Solutions are collecting important knowledge about transportation and transport with funding from the Federal Ministry of Education and Research (BMBF). The BMBF has allocated 11.63 million euros to the initiative, which is part of Transhyde, one of the ministry’s three hydrogen pilot projects.

“When large-scale hydrogen production begins, the transportation and storage infrastructure must be ready at the same time.” “We deal with difficulties that are open to pipeline-bound hydrogen transport in our work packages,” says project coordinator Frank Graf, head of gas technology at the DVGW research center at the Karlsruhe Institute of Technology’s Engler-Bunte Institute. The study is focused on establishing a demonstration facility in Lingen, Lower Saxony.

The combined effort will establish the metrological foundation for publicly accessible hydrogen long-distance networks. The Lingen test pipeline will be used to investigate key features of hydrogen transport under real-world settings and to answer key details questions. The regulatory organizations expect that, as a result of these in-depth examinations, the authorities will be able to further enhance the legislation to coincide with the commencement of the hydrogen economy.

The project’s tasks are listed below in detail:

Setting up and running a test environment

Material compatibility with H 2 is being investigated.

H 2 remote detection from the air

Pigging the lines in a clever way

The results must be consolidated and communicated.

Nowega had previously completed the intelligent pigging and cleaning of a pipeline planned for hydrogen conversion in Lingen in April 2021 as a first phase in the project, with encouraging results. In January, work on an electrolysis demonstration and a test pipeline will begin on the grounds of the RWE gas power plant Emsland. In 2024, as part of the GET H2 Nucleus project, one of the first publicly accessible hydrogen pipelines will begin operation from Lingen, transporting green hydrogen to the BP refinery in Gelsenkirchen.