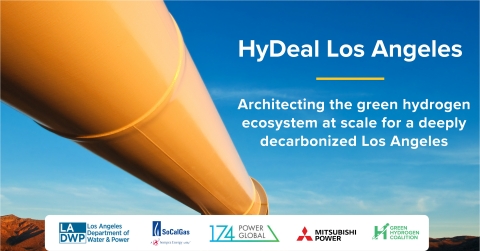 Green Hydrogen Coalition in conjunction with the Los Angeles Department of Water and Power (LADWP) and other key partners, announced the launch of HyDeal LA, an initiative to achieve at-scale green hydrogen procurement at $1.50/kilogram in the Los Angeles Basin by 2030.

Green hydrogen is a plentiful, carbon-free, and environmentally friendly energy carrier that may be made from renewable electricity, water, or organic waste. It can be used as a carbon-free fuel and can store seasonal energy for lengthy periods of time. Green hydrogen can enable deep decarbonization of hard-to-abate sectors, the reuse of important existing infrastructure, and an inexpensive, responsible energy transition when utilized as a replacement for fossil fuels. Stable pricing, energy diversification, and enhanced economic development are all advantages of lessening our reliance on imported fossil fuels. Anything from a power plant to a steel mill to a hydrogen fuel cell vehicle can run on green hydrogen.

“As Governor Newsom said during the release of the May Revise Budget last Friday, we need to focus on green hydrogen in this country, and California needs to compete in this space, Delivering on the promise of green hydrogen means collaboration and implementation, which are the foundations of the HyDeal LA initiative. Success means clean air, reliable power, zero-emission transportation, and importantly jobs and sustainable economic development.”

Dee Dee Myers, Senior Advisor to the Governor and Director of the Governor’s Office of Business and Economic Development

“Green hydrogen is the key to reliably achieving 100% renewable energy, We are pleased to join the HyDeal LA effort, which includes an innovative and expanding vendor and development community, to support and help catalyze the supply chain needed to achieve large-scale, low-cost green hydrogen power supply for our local in basin plants.”

LADWP’s participation in HyDeal LA is yet another big green hydrogen endeavor for the utility, which is leading the conversion of the Intermountain Power Project in Delta, Utah, to the world’s first gas turbine purposely planned and built to run on 100 percent carbon-free green hydrogen by 2035.

HyDeal LA is part of HyDeal North America, the Green Hydrogen Coalition’s commercialization platform focused to delivering green hydrogen at scale for multi-sectoral decarbonization. HyDeal LA is based on HyDeal Ambition, a comparable project in Europe that aims to produce and purchase 3.6 million tons of green hydrogen per year for the energy, industry, and transportation sectors at a cost of €1.5 per kilogram (kg) by 2030.

174 Power Global, Mitsubishi Power, and SoCalGas are among the HyDeal LA leaders, in addition to LADWP. Clifford Chance, Corporate Value Associates (CVA), Cranmore Partners, Energeia, Marathon Capital, Sheppard Mullin, and Strategen are among the key implementation partners. Phase 1 of HyDeal LA will design the high-value competitive supply chain required to achieve $1.50/kg delivered green hydrogen in the LA Basin, as well as reach an in-principle agreement on the terms and conditions required to scale up green hydrogen production, storage, transport, and delivery—all of which will be required to establish the green hydrogen ecosystem and economy in Los Angeles.

“As a leader in utility scale green hydrogen projects in the Western United States and globally, Mitsubishi Power is dedicated to attaining inexpensive green hydrogen pricing in Los Angeles and around the world, We’re bringing about a Power Shift with our customers and partners.”

“Green hydrogen presents a significant opportunity for our gigawatt-scale solar farms to deliver decarbonized energy to multiple sectors, We are thrilled to be part of HyDeal LA and creating the path forward for electrifying our fuel supply.”

“In Southern California, the confluence of geography, visionary climate policies, and public-private partnerships like HyDeal LA mean we are well positioned to develop transformative, pragmatic and globally scalable solutions toward an integrated, and carbon-free energy system, Hydrogen will play an important part in helping SoCalGas reach our goal of achieving net-zero emissions by 2045, in keeping utility bills affordable for families and businesses, and in keeping energy reliable and resilient as we make the transition.”

In addition to the project supporters, diverse advisors are supporting the initiative, including Rachel Fakhry, Senior Policy Analyst at the Natural Resource Defense Council. Green electrolytic hydrogen is a promising resource to help our path towards decarbonization, create a healthier environment, and clean up the air for local communities.”