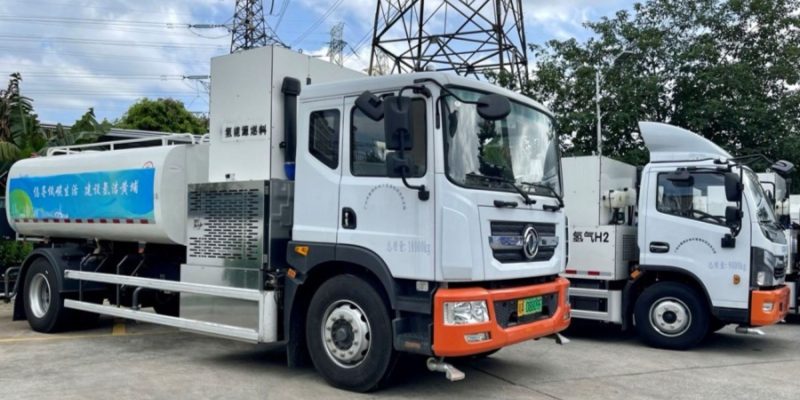 Guangzhou, a city in southern China, has placed 24 hydrogen-powered sanitation vehicles into action in its Huangpu District.

The director of the district’s urban management department stated that the trucks will mostly be used for road cleaning, including washing, sweeping, sprinkling, and dust control.

The hydrogen sanitation vehicles can be refueled in four to eight minutes, which is much less time than electric garbage trucks. As a result of the fuel cell engine’s high energy, high power density, and greater range, the garbage truck can function constantly. In addition, the burning of hydrogen energy creates only water, resulting in zero pollution.

Guangzhou Xiongtao Qingheng Technology Limited, a subsidiary of Guangzhou High-tech Zone Modern Energy Group Co., Ltd., designed and manufactured the hydrogen engine and system for this batch of hydrogen sanitation trucks. According to Ji Fanting, the chairman of Xiongtao, the company has run the first hydrogen bus demonstration line 388 in Guangzhou in partnership with Guangzhou Bus Group, which has traveled almost 2.8 million kilometers and decreased carbon dioxide emissions by nearly 2,000 tons.

In addition, Ji stated that the business intended to develop 500 hydrogen cold chain trucks in the logistics sector to cut carbon emissions even more.

On the same day, a gas operating license for a hydrogen refueling station in Guangzhou was issued to Xinhai Energy Lianxin Hydrogen Refueling Station. This station will provide hydrogen refueling services for hydrogen energy logistics trucks and buses in Huangpu District and the adjacent region in the near future.

In April, Liu Yafang, the deputy head of the Department of Science and Technology at China’s National Energy Administration, stated that the nation had constructed more than 250 hydrogen refueling stations, accounting for almost 40% of the global total and placing it in first place.