According to the city of Gwangyang on the 29th, the Hydrogen Industry Promotion Committee, held on the 27th in the City Hall Situation Room with Gwangyang Mayor Jeong In-hwa in attendance, was composed of 15 members, including 11 members, including 11 professors and hydrogen experts, and 4 ex officio members from related institutions including Gwangyang City Council member Choi Dae-won Choi. was commissioned as

The city enacted and promulgated the 「Gwangyang City Hydrogen Industry Promotion and Support Ordinance」 to systematically foster and support the hydrogen industry in April, and formed a committee according to the related ordinance.

Gwangyang Mayor Jeong In-hwa said, “I would like to express my congratulations and thanks to the members appointed today.”

She continued, “We will do our best to make Gwangyang a ‘2050 hydrogen economy center city’ through the hydrogen city development project and the attraction and nurturing of hydrogen-related industries. We ask that you do your best,” he added.

After the appointment ceremony was over, an interim report was held presided over by Deputy Mayor Joo Sun-sun, who was elected as the chairperson of the ‘Gwangyang City Hydrogen Industry Promotion Basic Plan Establishment Research Service’.

At the mid-term report, CEO Jang Seong-hyeok of Hydrogen Knowledge Group established the basic plan for fostering the hydrogen industry in Gwangyang City and set the core vision as ‘Port-linked Hydrogen Center City, Gwangyang City’, with four strategic goals to realize the vision:

According to the detailed contents of each strategy, to establish a mid- to long-term supply plan for hydrogen cars, hydrogen charging stations, and fuel cells for ‘building a hydrogen industry ecosystem’, establish a supply system for by-product hydrogen and green hydrogen according to demand, and establish a pipeline network as a stable hydrogen supply method. Is expected.

‘Excavation of regional specialized industries’ presented a plan to build a hydrogen port that converts all energy sources in Gwangyang Port to hydrogen and build a takeover base for the introduction of overseas green hydrogen within the POSCO LNG terminal.

As a ‘systematic promotion system’, it was proposed to establish an exclusive agency and an industry-academic-research council organization to implement and support the systematic development of the hydrogen industry in Gwangyang City.

After the interim report, the members showed great interest in the hydrogen pipeline network (L=19km) between POSCO and Gwangyang Port to be built as a hydrogen city project through a Q&A with the representatives of the service providers.

In particular, he requested that the city of Gwangyang and POSCO establish closer cooperation for the successful implementation of the hydrogen city development project that is currently being promoted by expanding the hydrogen pipeline network construction section to not only mobility and hydrogen charging stations but also nearby industrial complexes in terms of economy and efficiency.

As there are many difficulties in building hydrogen-related infrastructure, such as hydrogen refueling stations, due to licensing issues, local governments have also requested active interest and administrative support.

Chairman Joo Sun-sun said, “As public institutions and corporations such as the Gwangyang Bay Area Free Economic Zone Authority are promoting hydrogen-related services, I hope that they will form a consultative body to discuss the division of roles by business and institution and reflect the voices of the field.”

He added, “I ask that you establish and reflect the realism and acceptance of residents in the hydrogen city development project and the hydrogen-specialized complex construction being promoted by the government.”

Meanwhile, the city plans to hold a final report in November 2022 after collecting various opinions presented by officials from relevant institutions and members of the hydrogen industry promotion committee at the interim report, and after revision and supplementation through expert meetings in each field. 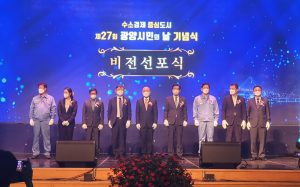