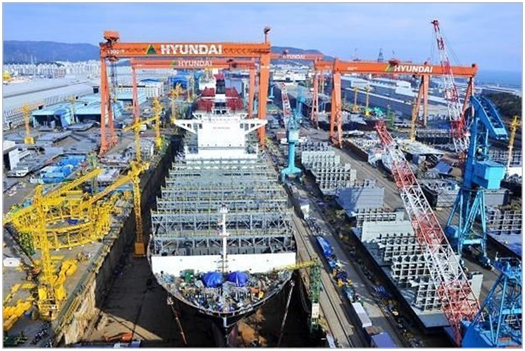 Hyundai Heavy Industries (HHI) reported on May 6 that it had signed an MOU with nine organizations to construct a floating wind farm in the East Sea with 100 MW of green hydrogen production facilities.

The first phase of the project, according to the MOU, will be to build a 100 MW green hydrogen pilot plant in a floating wind farm in the East Sea by 2025. By 2030, their second phase project will consist of the construction of a 1.2 GW large-scale green hydrogen production facility.

HHI plans to build a large-scale hydroelectric green hydrogen plant that uses energy from the floating wind farm to generate hydrogen from seawater.

Green hydrogen is generated by decomposing water with the help of renewable energy sources including wind power. Since it emits no carbon dioxide, it is expected to be an environmentally sustainable energy source in the future.

Hyundai Heavy Industries Group unveiled the “Hydrogen Dream 2030 Roadmap” in March, outlining the company’s hydrogen business strategy, which includes anything from hydrogen development on land and sea to hydrogen transportation, storage, and usage.