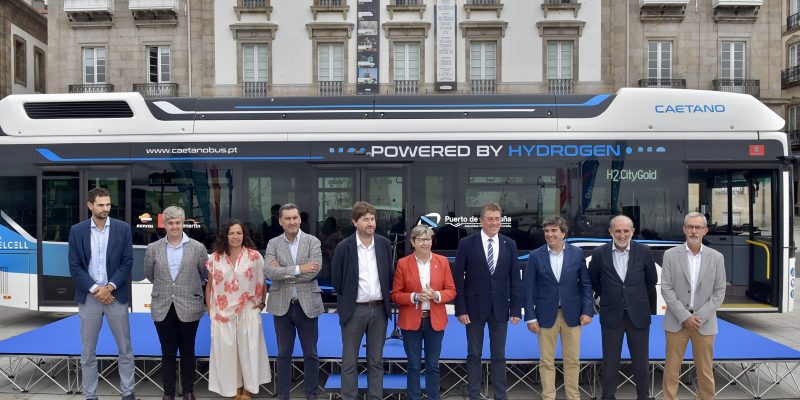 Port of A Coruña

The Port Authority of A Coruña held this morning an event in Avenida de la Marina to present the pilot experience of a bus powered by renewable hydrogen, within the framework of “A Coruña Green Port”.

The test runs with passengers will start tomorrow, Tuesday, on line 1 of the urban transport of A Coruña, operated by Compañía de Tranvías, also integrated in this project.

The president of the Port Authority, Martín Fernández Prado, wanted to thank both Compañía de Tranvías and the companies Repsol, Enerfín and Caetano for their participation in this pioneering experience in the ports of Galicia, and one of the first in Spain, which allows a new step forward in the Green Port project, which focuses the strategy of the Port of A Coruña in the field of new energies and the decarbonization of the industry.

During the test period, which will last about a week, allowing to test the operation of the vehicle and, as pointed out by the president of the Port Authority, to bring closer to the citizens and companies of A Coruña this technology that is destined to become a major player in the energy transition.

One of the main lines in the energy transition plan of the Port of A Coruña is precisely the value chain of green hydrogen, both in the industrial field and in mobility. For the latter field, the “H2 Mobility” Group has been set up, with the participation of Compañía de Tranvías, the engineering company Avia and the energy company Enerfín, which will generate green hydrogen in Punta Langosteira using the energy produced by Inditex’s wind farm.

The Association is eligible to receive Next Generation funds in the “Pioneers” section, with the aim of incorporating the use of green hydrogen in transport, mainly trucks and buses, and thus contribute to the decarbonization of companies in the port and in general in the metropolitan area.

Fernández Prado showed his confidence that very soon new companies will join this Grouping, while he thanked in a special way all the support provided by the Xunta de Galicia in the innovation projects promoted by the Port Authority.

The Regional Administration was represented by the Regional Minister of the Sea, Rosa Quintana, who pointed out that today is an important day for A Coruña and for Arteixo, two towns which house the port facilities and which were represented by the mayor, Carlos Calvelo, in the case of Arteixo, and by the first deputy mayor, Juan Ignacio Borrego, in the case of A Coruña.

Rosa Quintana expressed her gratitude to the Port Authority and to all the companies that have been involved in the project, adding that the commitment to sustainability is in the DNA of the Xunta’s policies. The conselleira showed her pride, as responsible for the management of the aspects related to the sea, for the fact that it is a port authority the pioneer in the search for new sources of energy to contribute to the conservation of the planet, while advancing in its growth and development.

In the same line expressed the first deputy mayor, Juan Ignacio Borrego, reiterating the commitment of the City Council of A Coruña with sustainable mobility, which is a necessity and an obligation to contribute to the quality of life of citizens.

Therefore, he congratulated the Port Authority for promoting this initiative and also the operator of public transport in A Coruña, the Compañía de Tranvías, which was represented by its director, Ignacio Prada, who thanked the opportunity to participate in a project that demonstrates the long-term commitment of this centenary company with sustainable mobility. He recalled in this regard that tests have already been conducted with electric buses, but noted that it is hydrogen that is positioning itself as a very important vector in electromobility, for its ability to store and transport large amounts of energy in vehicles.

The event was also attended by the Production Director of Repsol’s Industrial Complex in A Coruña, José María García Llanos, who highlighted the opportunity for the A Coruña refinery to be part of A Coruña Green Port, allowing it to launch pioneering projects that accelerate the development of key technologies in decarbonization, as in the case of this collaboration.

He added that his company is undergoing a profound process of industrial transformation, with the aim of converting its refineries into multi-energy poles capable of manufacturing products with the smallest possible carbon footprint. For his part, Enerfin’s CEO, Jose Castellanos, pointed out that this test proves that the application of hydrogen to mobility is already a tangible reality. In the case of his company, he reiterated its commitment to the development of projects in Galicia that contribute to sustainable development.