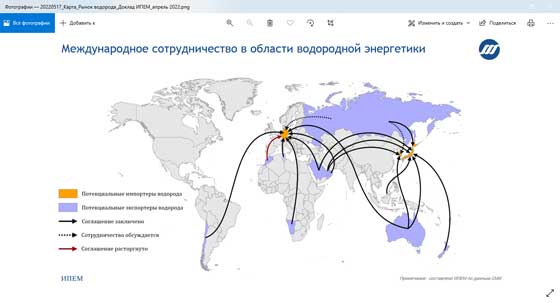 The research ” Hydrogen: Market Formation and Prospects for Russia ” is published by IPEM. The paper studied global hydrogen strategies and estimated Russia’s export potential based on data on the prospects for hydrogen consumption in various countries, the intentions of other prospective hydrogen exporters, and the possibilities for hydrogen production in Russia.

The study was sent to the federal executive branch, the Russian Union of Industrialists and Entrepreneurs (RSPP), and industrial organizations for review.

Because large-scale hydrogen utilization in numerous spheres of activity is such a novel concept, its prospects are still questionable. On the same hand, the amount of investment necessary for the development of hydrogen energy is quite large – simply for EU nations, it is predicted to be 320-458 billion euros between 2020 and 2030 – and the “hydrogen future” cannot be developed without governmental help in the near future.

The IPEM research looked at the issues that are preventing the global growth of hydrogen energy. High production costs of “renewable” and “low-carbon” hydrogen, as well as a lack of optimum and inexpensive transportation and storage methods, are among them. Furthermore, a number of nations desiring to be big producers of hydrogen with a low carbon footprint lack industrial methods for capturing and storing carbon dioxide, and several prospective exporters of “green” hydrogen lack the freshwater required for electrolysis production.

Experts at IPEM stress that the growth of hydrogen energy should be accompanied by extensive study in the fields of ecology and climatology, because the negative consequences of hydrogen leaks into the atmosphere may outweigh the good advantages in terms of lowering greenhouse gas emissions.

Russia should concentrate on increasing the quantities and directions of domestic hydrogen consumption, as well as developing and developing hydrogen technologies to preserve a competitive edge. This is especially relevant in light of strained ties and less collaboration with nations that may be potential hydrogen importers. In this case, if the geopolitical environment stabilizes, ensuring the requisite amounts of hydrogen exports in the future will not be problematic.