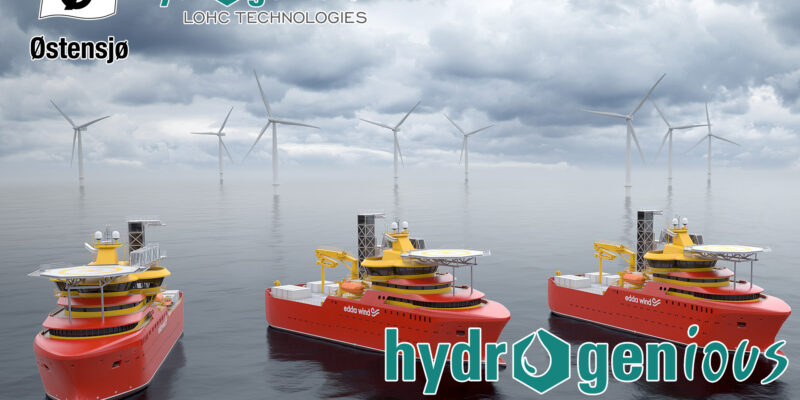 The emphasis is on megawatt-scale on-board LOHC/fuel cell propulsion systems. This will be a particularly safe technique because the hydrogen will be bound to the LOHC. Furthermore, Hydrogenious’ Liquid Organic Hydrogen Carrier is applicable to traditional bunkering facilities both onboard and at ports. The Norwegian Ministry of Climate and Environment’s financing agency Enova stated that it will contribute NOK 26 million to the joint venture’s maiden project HyNjord (about €2,5 million).

“We’re very happy to have found the ideal partner in the Østensjø Group. The Østensjø Group, which is well established not only in Norway but also internationally, has seen LOHC as the game changer for the decarbonization of shipping for some time.”

“The Østensjø Group is committed to take part of the energy transition and to find ways to cut emissions. Of all the potential zero-emission technologies, we find LOHC the most promising one. That is why we have prepared all six service operation vessels under construction in our subsidiary, Edda Wind, for LOHC-based propulsion.”

Enova SF has decided to fund the development of a 200 kw pilot of the LOHC/fuel cell propulsion system – the focus of the first joint venture project HyNjord – with NOK 26 million. The planned application will integrate three core components on-board: The LOHC Release Unit, which releases hydrogen from the liquid organic carrier Benzyltoluene on demand on the ship, as well as a fuel cell and an interface to the ship’s power management system.