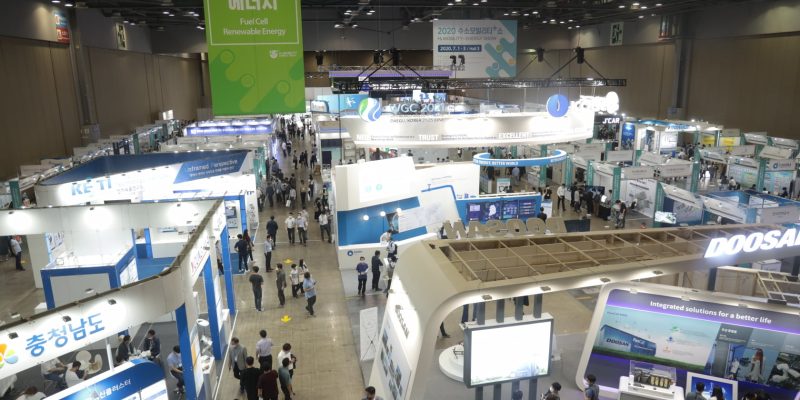 240 hydrogen-related companies and institutes from 16 countries will show goods and technology related to hydrogen mobility, hydrogen generation, storage, and transportation at exhibitions, seminars, and conferences.

In the 1200 square meter exhibition hall, Hyundai Motor Group has set up different exhibitions of group companies with different themes, such as hydrogen technology, hydrogen development, and hydrogen production. This is to make it easier to bring commercialization technology for hydrogen to the hall.

At the H2 Meet 2022, Hyundai Motor Company showed off a hydrogen-powered commercial vehicle that shows how hydrogen energy can be used “for everyone, everything, and everywhere.”

Hyundai Motor Company introduced a hydrogen electric police bus that was designed according to the function of the police bus, including the number of passengers and the interior space, by attaching a hydrogen fuel cell system to the universe-based police bus.

Since it was first announced in 2019, the Hydrogen Electric Bus Police Bus has been a new mass-produced model that is actively pushing for wide distribution by changing how it looks on the inside and outside and adding many convenience features.

The electric hydrogen bus The hydrogen electric police bus has a fuel cell stack with two hydrogen fuel cells that add up to 180 kw. It can go up to 550 km on a single charge and is a good model for public institutions because it works so well.

In particular, the current police bus with an internal combustion engine creates annoyance owing to engine noise and exhaust gas emissions caused by unavoidable idling in the city. It is anticipated to be of tremendous assistance to progress.

The hydrogen electric police bus that was presented at this time has a robust design that can hold up to 29 passengers, including the driver. A separate loading space at the back of the interior and a 4.9 m2 cargo space in the lower part of the bus were added to make the most of the space for loading different things that police officers need to do their jobs.

At the same time, Hyundai Motor Company showed off its first environmentally friendly cleaning cars, which were based on the Xient hydrogen electric truck. They were a cleaning car and a sprinkler car.

The hydrogen electric truck cleaning and watering car has a 180kW hydrogen fuel cell system with two hydrogen fuel cells and a 350kW-class drive motor with a maximum output. It can go up to 400 kilometers on a single charge.

To reduce the volume of rubbish, the hydrogen electric truck vacuum cleaner is a compact squeezer equipped with a high-density compression device. It can handle a lot of trash at once because it has a 20m3 capacity and a loading capacity of up to 10,300kg. It also has a horizontal garbage disposal function.

On the hydrogen electric truck watering car, a watering tank with a capacity of 6,400 liters of liquid and a watering pump with a capacity of 1,000 liters per minute were installed. It also has a 20-meter-long tarpaulin for putting out small fires and an air spray system that keeps fine dust from blowing onto the road while it cleans.

Unlike most vehicles with internal combustion engines, hydrogen electric truck washing and watering vehicles don’t give off any exhaust gas. This can make the workplace even better for workers. Low noise levels are expected to cut down on noise pollution in the cleaning section and residential areas by a lot.

Hyundai Motor Company developed a hydrogen electric truck cleaning vehicle and a water sprinkler car as part of the Ministry of Trade, Industry, and Energy’s “Development and demonstration of hydrogen electric truck modification technology” research and development project. By the end of this year, Hyundai Motor plans to do a demonstration with the Industrial Technology Evaluation and Management Institute and the Korea Automobile Research Institute.

Next year, Hyundai Motor wants to begin selling hydrogen-electric truck cleaning vehicles and water sprinklers. At this expo, they want to do everything they can to promote the supply of specialized hydrogen-powered cars. For example, they will try hard to find out how much demand there is in the U.S. and abroad through purchasing consultations.

In addition, the company showcased a hydrogen fuel cell and battery-powered “hydrogen multicopter drone” at the Future Air Mobility Tech Day 2022 in May.

The hydrogen multicopter drone is made to fly efficiently over longer distances. It does this by using both a hydrogen fuel system and a battery.

At the same time, Hyundai Mobis showed off the M.Vision Tug, which has a 30kW hydrogen fuel cell power pack, for the first time.

The Mvision Tug is a specialized truck primarily employed for airplane mooring and baggage handling at airports. Specifically, the “Dolly,” which is a wheeled plate, is attached to the Ambition Tug in order to maximize expandability and optimize freight transportation.

In addition, Hyundai Mobis displayed a Mvision Tug equipped with a tiny fuel cell power pack. It is a fuel cell module with newly made controls and a lot of shut-off valves that make it good for small mobility.

Hyundai Steel showed a model of a carbon-neutral steelmaking process that uses hydrogen, as well as a hydrogen fuel cell metal separator, which is an important part of a hydrogen-powered car.

The hydrogen fuel cell metal separator is an integral component of a hydrogen electric vehicle that distributes the hydrogen and air delivered to the fuel cell stack and transmits the electricity generated. plates are produced in large quantities.

Hyundai Motor Group also wants to attract people’s attention by holding other events, such as a Junior Engineering Class for elementary school students who try to build their own models of hydrogen-electric cars, an SNS hashtag event, and flying small drones.

Also, Hyundai Motor Vice President Dongwook Kim will be on a panel at the International Hydrogen Conference on September 2 called “Development Plan for the Hydrogen Industry” and will talk about the hydrogen industry.

An official from Hyundai Motor stated, “H2 Meet 2022 will be an excellent occasion to convey the Hyundai Motor Group’s efforts to promote hydrogen-powered commercial cars and the vision of the hydrogen-related industry. We will extend the ecology of hydrogen. “

A country with a future in green hydrogen