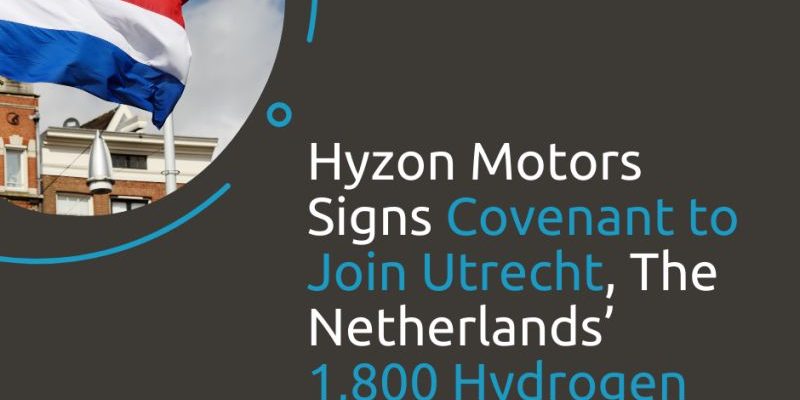 Hyzon Motors, a global leader in zero-emission hydrogen fuel cell-powered heavy vehicles, has signed the Utrecht Covenant on Hydrogen in Mobility (the “Covenant”).

Hyzon intends to harness existing technology in order to provide the zero-emission mobility options stated in the project.

The effort brings together leaders in the hydrogen transition with the goal of increasing green hydrogen production and creating regional hydrogen fuelling infrastructure. Hydrogen fuel cells will be used to power commercial vehicles such as lorries and buses on the streets of Utrecht.

The province of Utrecht is a pioneer in the field of hydrogen mobility, with many hydrogen fuelling stations already operational and more on the way. Utrecht’s goal is to solidify the region’s leadership in the transition to a zero-emissions future. By signing the Covenant, the parties confirm their commitment to directly or indirectly assisting in the implementation of the following:

Utrecht’s aims are notable for their aggressive timeline: the parties have committed to achieving these targets by 2025. While the worldwide transition to zero-emission transportation is still in its infancy, the effort demonstrates the criticality and practicality of speeding up the process. Hyzon Motors Europe BV began producing and delivering hydrogen trucks to clients from its new production facility in the Groningen area earlier in 2021.

Hyzon’s participation comes on the heels of the formation of the Hyzon Zero Carbon Alliance, a global initiative to improve hydrogen ecosystems. With founding members including AXA, Bank of America, Raven SR, ReCarbon, and Total, Hyzon’s initiative brings together the supply and demand sides of the sector, pooling collective experience to accelerate the adoption of zero-emission hydrogen mobility.

“The Utrecht 1,800 vehicle pledge connects and aligns partners along every step of the value chain: lo-cal governments, green hydrogen producers, distributors, FCEV OEMs, and customers. Hydrogen will play a significant role in decarbonizing transport; if we focus on building out the ecosystem through col-laborations such as this and the Hyzon Zero Carbon Alliance, we can reach our zero emissions goals that much more swiftly.”