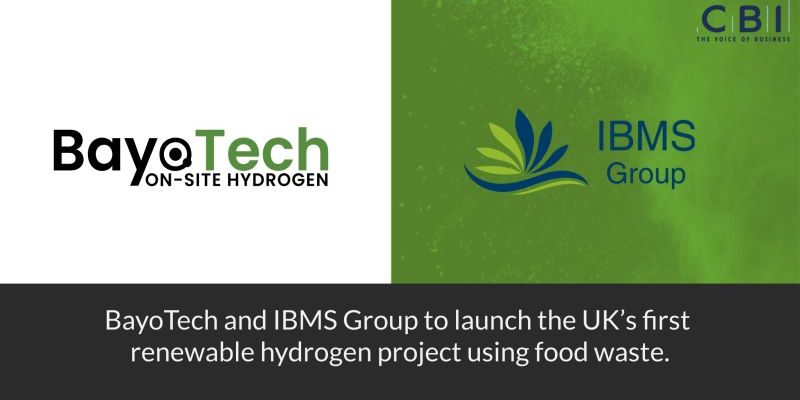 BayoTech and IBMS Group signed a deal to develop the UK’s first renewable hydrogen project, which will use biomethane derived from food waste as a feedstock.

The project will generate 1,000 kg of renewable hydrogen per day to power zero-emission automobiles in the United Kingdom’s London and Surrey districts. The alliance timed its public debut to coincide with the introduction of the CBI’s ‘Seize the Moment’ program and to highlight the critical role of cleantech in driving economic recovery as the UK emerges from the COVID-19 pandemic.

This transatlantic collaboration brings together two companies dedicated to addressing the need for green fuel to decarbonize transportation and energy-intensive industries. Biomethane will be produced from food waste at IBMS’ multi-purpose eco-facility and then converted to renewable hydrogen utilizing BayoTech’s leading modular on-site hydrogen generation technology. The system is scheduled to go live in the second part of 2022.

“BayoTech is thrilled to be working with IBMS Group on such a ground-breaking project. Using food waste to create zero carbon fuel is an excellent example of regional sustainability,” said Steve Jones, BayoTech’s Vice President, Europe. “This tackles a bottleneck of renewable hydrogen availability in the UK and gives fleet operators immediate access to cost effective, carbon neutral or even carbon negative hydrogen.”

By implementing a regional hydrogen production and distribution model, needless costs, storage, and transportation are avoided, resulting in a substantially lower total carbon footprint than standard production models and electrolyser systems. Carbon capture will be implemented in subsequent phases of the project to convert it from carbon neutral to carbon negative. The combination of BayoTech’s technology and IBMS Group’s biomethane with carbon capture enables the production of the most cost-effective decarbonised hydrogen currently available.

Steve Sharratt, CEO of IBMS Group commented, “We are delighted to be working in partnership with the world’s leading modular on-site hydrogen generation provider and playing our part in satisfying the increasing demand for carbon neutral and negative hydrogen in the UK. We look forward to launching the initial project next year and then rolling it out across multiple UK locations in the next few years to create a national network of carbon negative hydrogen production facilities.”

This announcement nicely complements the CBI’s launch of the ‘Seize the Moment’ campaign, a bold, ambitious strategy to establish a vibrant, competitive, and future-focused economy with a renewed focus on GHG reduction as the UK emerges from the COVID pandemic. Renewable hydrogen is critical to the ‘Seize the Moment’ initiative’s decarbonisation goals.

Tom Thackray, Director of Infrastructure at the CBI said, “Today’s announcement marks an exciting next step in the UK’s leadership in green hydrogen production and deployment – as well as the decarbonisation of mobility. Decarbonisation presents a wealth of opportunities for business and low-carbon hydrogen will play a critical role in bolstering the UK’s economy and achieving net-zero by 2050. This hydrogen project is a key example of business seizing the moment to harness these opportunities.”