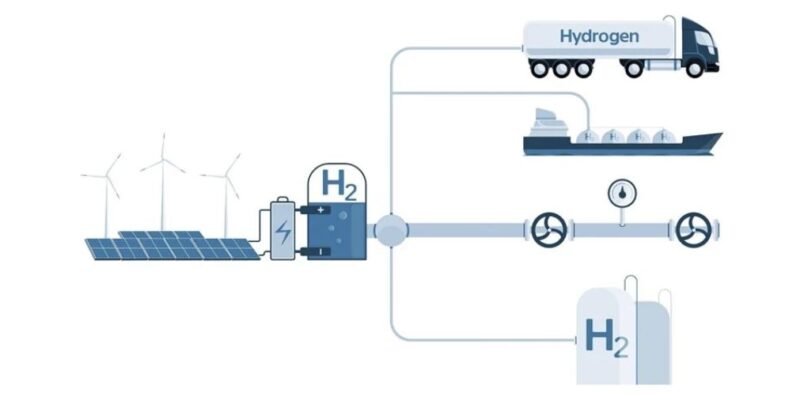 Because there are no clearly established criteria for the safe storage and transportation of hydrogen, a recent paper in the journal Energies effectively addresses the risks and compares the hydrogen and LPG transportation systems.

The terms “safety,” “risk,” and “hazard” are all used interchange
The purpose of safety measures is to control known threats to achieve an optimal level of risk. According to ISO/IEC Guide 51:2014, a hazard is defined as a potential source of harm to people, property, or the environment. The term “risk” refers to the combination of the chance of harm and the severity of that harm.

Hydrogen Safety is Affected by a Variety of Factors

The specific gravity energy density of hydrogen is 33.3 kWh/kg, whereas the volumetric energy density is only 3 kWh/m3. At normal pressure, hydrogen’s boiling temperature is 20 K, and its melting point is 14 K, both of which are pressure-dependent. The boiling point is unaffected by pressures greater than 33 K and 1296 MPa (12.96 bar). All of these characteristics are crucial in terms of safety considerations.

Hazards Associated with Hydrogen in General

The most hazardous feature of hydrogen is its great flammability. It is often seen as more harmful than natural gas, which is already widely used in transportation, due to its wide range of flammable percentages (4-75 percent). Hydrogen has a lower autoignition temperature than many other compounds used in transportation, making it much more harmful.

Explosion risk is a significant stumbling block to its shipment. From the lower explosive limit (LEL) to the upper explosive limit (UEL), the quantities at which a gas can explode are mentioned (UEL). Because hydrogen has such a wide explosive range, bursting is a serious worry.

Hydrogen sensors come in a variety of shapes and sizes. According to one study, electrochemical sensors make up the bulk of commercially available sensors. In terms of responsiveness, environmental conditions, aging, drift, reaction time, and durability, the right sensor type for a certain application must be chosen.

The limitations of a single sensor module can be overcome by combining many distinct kinds. Power consumption, complexity, and cost should all be considered. The tolerance of various sensor types should also be considered.

Gaseous hydrogen is frequently stored at pressures ranging from 350 to 700 bar in gas containers. A risk of pressurized storage is the container collapsing, resulting in an uncontrolled release of hydrogen.

If the internal vessel pressure rises owing to a fast rise in temperature caused by a fire, a thermally triggered pressure relief device (TPRD) can immediately release all of the hydrogens in the container before a breach occurs due to damaged walls.

Are there any Hydrogen Shipping Projects in the Works?

Several projects are now happening throughout the world to solve the issue of hydrogen-related maritime infrastructure. The ship “Suiso Frontier” was launched in 2016 as a project of the Hydrogen Energy Supply Chain Technology Research Association (HySTRA). It will transport liquid hydrogen (LH2) between Australia and Japan.

The headquarters of Hydra is in Stavanger, Norway. It is the first hydrogen transportation operation in the world. The 82-meter-long vessel can handle 80 cars and 290 people. In Sweden, MAN has launched a project on liquid hydrogen fuel-gas supply systems. The IGF Code was followed in the development of this mechanism.

A Different Approach to Design

There are currently no hydrogen laws in transportation, although the alternative design process allows for hydrogen equipment authorization. To establish a valid comparison, all criteria of the investigated system must be determined first. Pairwise comparison will be used to assess the importance of these parameters in terms of protection.

Each criterion in a row is cross-checked against the criteria in the column. The values in each row are joined together once the table is completely filled. A control mechanism can be implemented using this number. The newly constructed system is then evaluated as a system that complies with current requirements, such as an LNG system in this case.

In brief, the LNG comparison approach will aid in the standardization of hydrogen safety norms and enable safe hydrogen shipping throughout the world.

RWE builds a test facility for hydrogen production in Lingen