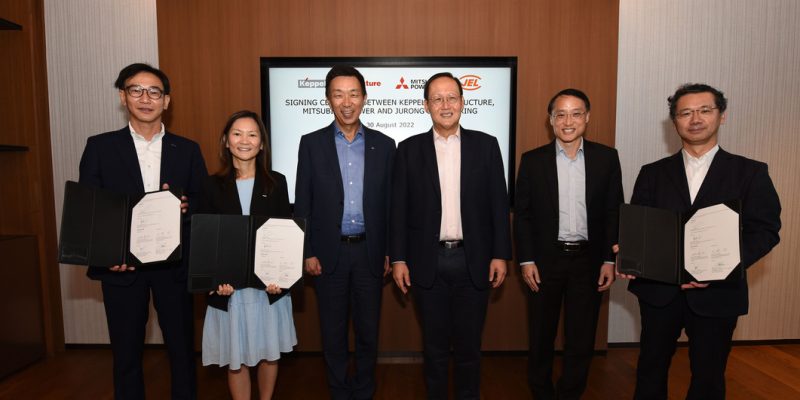 Keppel Infrastructure, through its wholly-owned subsidiary Keppel Energy, has reached a final investment decision (FID) to develop a 600MW advanced combined cycle gas turbine (CCGT) power plant and has awarded an engineering, procurement, and construction (EPC) contract to a consortium consisting of Mitsubishi Power Asia Pacific and Jurong Engineering for the construction of the plant.

The Keppel Sakra Cogen Plant, which will be constructed on the Sakra district of Jurong Island, will be the first hydrogen-ready power plant in Singapore.

The Keppel Sakra Cogen Plant is initially designed to run on natural gas as its principal fuel, but it is also capable of operating on fuels with a 30% hydrogen content and running wholly on hydrogen. In addition, as a CCGT power plant, it will be able to produce steam for use in industrial processes by Jurong Island’s energy and chemical customers. The Keppel Sakra Cogen Plant, which is anticipated to be finished in the first half of 2026, will be the most advanced and energy-efficient power plant in Singapore, resulting in superior performance, such as reduced emission intensity and more operation flexibility. This advanced CCGT will be the most efficient of Singapore’s operating fleet, able to save up to 220,000 tons of CO2 annually compared to Singapore’s average operating efficiency for equal power generation. These CO2 equivalent savings are equivalent to removing around 47,000 automobiles from the road annually.

Mitsubishi Power Asia Pacific was also given a long-term servicing (LTS) contract for extensive maintenance of the turbine.

As the energy sector accounts for about 40 percent of Singapore’s carbon emissions[2,] decarbonizing electricity generation is central to the worldwide effort to combat climate change and a fundamental component of Singapore’s Green Plan.

In addition to the EPC and LTS contracts, Keppel New Energy Pte Ltd, a wholly owned subsidiary of Keppel Infrastructure, signed a memorandum of understanding (MOU) with Mitsubishi Heavy Industries, Ltd. to conduct a feasibility study on the development of a 100% ammonia-fueled power plant at a predetermined location in Singapore. This partnership aims to address the energy trilemma and contribute to the development of a more resilient and sustainable energy industry in Singapore and the surrounding area.

The Final Investment Decision (FID) on the Keppel Sakra Power Plant and the Memorandum of Understanding (MOU) on the 100% ammonia-fueled combined cycle power plant are consistent with Keppel’s Vision 2030, which places sustainability at the center of the company’s strategy.

“Singapore’s electricity demand is projected to grow with increasing electrification and economic growth. As such, the Energy Market Authority welcomes investments by the private sector to bring in best-in-class technologies in power generation. Being hydrogen-ready, this power plant by Keppel will contribute towards greater efficiency and lower carbon emissions. This will support Singapore’s transition to a more sustainable energy future while ensuring the security and reliability of electricity supply to consumers,” said Mr Ngiam Shih Chun, Chief Executive, EMA.

Ms Cindy Lim, CEO of Keppel Infrastructure, said, “The 600MW Keppel Sakra Cogen Plant will be Singapore’s first hydrogen-ready and most advanced, high-efficiency combined cycle gas turbine power plant, placing Keppel Infrastructure at the forefront of the effort to decarbonise Singapore’s power sector. When completed, this asset will grow Keppel’s power generation portfolio from the current 1,300 MW to 1,900 MW, allowing us to capture a larger market share as the demand for reliable energy continues to rise with Singapore’s economic development.”

Ms Christina Tan, CEO of Keppel Capital, the parent company of the manager of KAIF said, “The joint investment by Keppel Infrastructure and KAIF in the Keppel Sakra Cogen Plant reflects the Keppel Group’s asset-light business model as we seize opportunities in the energy transition. We believe that hydrogen, as a low-carbon fuel, will play a critical role in supporting Singapore’s commitment to decarbonise its power sector. Keppel Capital will continue to leverage the synergies of the Keppel Group to identify and invest in such future-ready projects to create value for our investors.”

Mr Osamu Ono, Managing Director and Chief Executive Officer of Mitsubishi Power Asia Pacific, commented, “Mitsubishi Power looks forward to supplying the Keppel Sakra Cogen Plant with our hydrogen-ready JAC gas turbine. The plant will enjoy the unmatched combination of world-class efficiency and proven reliability backed by abundant operation hours of the fleet worldwide, T-Point 2 grid-connected combined cycle power plant verification facility located at Takasago Hydrogen Park in Japan, and our extensive experience with power generation using hydrogen-rich fuel for over half a century.  As an innovative low- and zero-carbon fuel, there is immense potential for hydrogen to be used in power generation systems to enable emissions reduction. It is our honour to partner with Keppel Infrastructure, a visionary in the energy sector, to achieve our aligned net zero vision and build a sustainable energy future for Singapore.”

Mr Koichi Watanabe, Managing Director and Chief Executive Officer of Jurong Engineering Limited, commented, “We are glad to have a hand in the establishment of the Keppel Sakra Cogen Plant that is part of a concerted effort towards the decarbonisation of our future power generation. Jurong Engineering will continue to diversify and strengthen our engineering capabilities by providing innovative solutions while contributing to a greener future.”