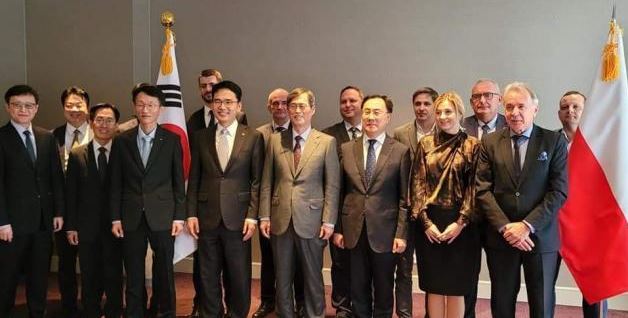 The administration is encouraging energy cooperation with Poland, including hydrogen and batteries, as well as securing nuclear power project orders.

Minister Moon Seung-wook met with Piotr Naimski, Special Ambassador for Energy Infrastructure, in Warsaw, Poland, to discuss cooperation in energy fields such as hydrogen and batteries, as well as nuclear power plant order activities, according to the Ministry of Trade, Industry, and Energy.

Many high-ranking government officials involved in the Polish nuclear power plant project and energy sector, including Vice Minister of Climate and Environment Adam Giburze Zetwertinski, attended the meeting, including the special envoy for Energy Infrastructure Naimsky, who is a key figure in policy decision-making in Poland.

Minister Moon stated in an interview with Naimsky that Korea is the greatest partner for the Polish nuclear power plant project, and he urged interest and assistance from Korean enterprises to participate in the project.

First, Minister Moon stated that the UAE nuclear power plant project, for which Korea was awarded a contract, is proceeding smoothly, with Unit 1 beginning commercial operations in April.

“Team Korea, led by KHNP, is preparing a business proposal for the successful promotion of the Polish nuclear power plant project, which will be submitted to the Polish government in the first half of next year, taking into account not only the technical characteristics of Korean nuclear power plants, but also technology transfer and manpower training plans,” Minister Moon said. “I’ll do it,” he stated.

“The Korean government stressed that it is working with connected firms and organizations, such as banking institutions, to develop realistic funding arrangements.

“Poland is searching for a partner who can not only supply technology but also run nuclear power stations,” he continued, “and Korea is one of the leading prospects for collaboration.”

“Through the agreement between the two presidents, the basis has been created for the trilateral collaboration between Korea, the United States, and Poland in the Polish nuclear power plant project,” Minister Moon said.

The two sides exchanged views on how to improve collaboration in a variety of energy domains, including hydrogen, CCUS, and batteries.

For the goal of carbon neutrality in Poland, Deputy Minister of Climate Change Zetbertinski devised ‘Energy Policy 2040,’ and expressed significant interest in developing energy storage technology and hoped for collaboration between the two nations.

The two sides agreed to organize a joint energy committee between the Ministries of Trade, Industry, and Energy and the Ministry of Climate and Environment in the first half of next year to consider specific cooperation measures in the energy sector, such as nuclear power and hydrogen.