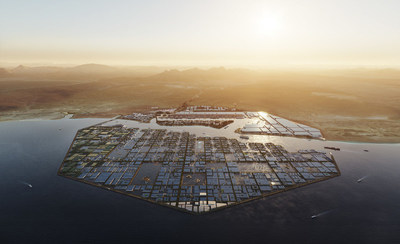 His Royal Highness Mohammed bin Salman, Crown Prince and Chairman of the NEOM Company Board of Directors, announced OXAGON, the next phase of NEOM’s master plan and a radical new model for future manufacturing centers, based on NEOM’s strategies of redefining the way humanity lives and works in the future.

The development of OXAGON is well along, and plans for the big manufacturing facilities are in the works. The world’s largest green hydrogen project, a joint venture between Air Products, ACWA Power, and NEOM; the world’s largest and most advanced modular building construction factory, with Gulf Modular International; and the region’s largest hyper scale data center, a joint venture between FAS Energy and NEOM

His Royal Highness, speaking at the announcement of the city’s foundation, said: “OXAGON will be a catalyst for economic growth and diversification in NEOM and the Kingdom, allowing us to achieve our Vision 2030 goals. OXAGON will help to reshape the way the world approaches industrial development in the future, safeguarding the environment while also generating employment and growth for NEOM. It will help Saudi Arabia’s regional trade and commerce, as well as facilitate the creation of a new global trading hub. I am glad to see that construction and business have begun on the ground, and we anticipate the city’s quick growth.”

NEOM’s CEO, Nadhmi Al-Nasr, said: “There will be a fundamental shift in how the world perceives industrial hubs as a result of OXAGON. What motivates us is seeing the zeal with which a number of our partners have expressed a desire to begin their initiatives in OXAGON. These changemakers will build factories using the most cutting-edge artificial intelligence technology, ushering in a big jump into the Fourth Industrial Revolution for our period. OXAGON, like THE LINE, will be a comprehensive cognitive city with excellent livability for its citizens.”

The main urban environment, which covers a huge area in the southwest quadrant of NEOM, is centered on the integrated port and logistics hub, which will house the bulk of the city’s projected population. The unusual octagonal design has a low environmental effect and allows optimal land use, with the remaining 95 percent of the natural environment preserved. The world’s biggest floating structure, which will serve as a hub for NEOM’s Blue Economy and help the city achieve long-term growth, is a distinctive element of the metropolis.

OXAGON will provide extraordinary livability in conjunction with nature, complementing the same idea and principles as THE LINE (announced in January 2021). OXAGON will be one of the world’s most technologically sophisticated logistics centers, with state-of-the-art integrated port and airport connections, and will be strategically placed on the Red Sea near the Suez Canal, through which about 13% of the world’s traffic flows.

For NEOM, OXAGON will build the first fully integrated port and supply chain ecosystem in the world. The port, logistics, and train delivery facilities will be merged, resulting in world-class productivity and net-zero carbon emissions, setting worldwide standards for technology adoption and environmental sustainability.

Real-time planning will be possible thanks to the flexible and integrated physical and digital supply chain and logistics system, which will provide secure on-time delivery, efficiency, and cost-effectiveness for industrial partners.

The adoption of advanced technologies such as the Internet of Things (IoT), human-machine fusion, artificial and predictive intelligence, and robotics, all of which will be coupled with a network of fully automated distribution centers and autonomous last-mile delivery assets to drive NEOM’s ambitions of creating a seamless integrated, intelligent, and efficient supply chain, will be at the heart of OXAGON’s strategy.

The net-zero city will be powered entirely by renewable energy and will serve as a focal point for industry leaders who wish to lead the way in developing sophisticated and environmentally friendly factories in the future.

The nucleus of OXAGON’s industrial development is made up of seven areas, with innovation and new technology providing a critical foundation for these businesses. Sustainable energy, autonomous mobility, water innovation, sustainable food production, health and well-being, technology and digital manufacturing (including telecommunications, space technology, and robotics), and modern construction methods are among these industries, all of which are powered entirely by renewable energy.

The urban landscape of OXAGON reflects many of the characteristics of THE LINE that make it so livable. Communities will be walkable or accessible by hydrogen-powered transportation. Sustainable industry will be constructed around communities, reducing commuting times and enhancing livability by incorporating nature into the urban environment.

Hydrogen and AI decisive for development of “green” technologies in Russia