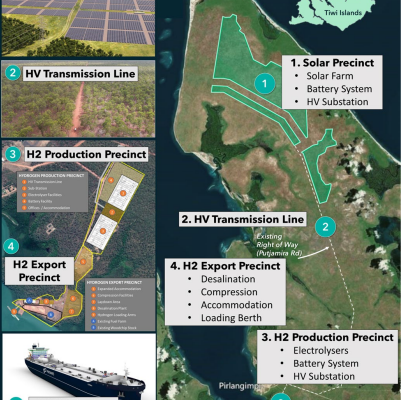 The NT Government has designated the Tiwi H2 project as a major project, as reported by Provaris Energy.

Tiwi H2 is an integrated compressed green hydrogen production and export development located in the Tiwi Islands, with an annual production capacity of up to 100,000 tons of green hydrogen for export to the Asia-Pacific area.

Provaris’ Managing Director, Martin Carolan, commented: “The endorsement of the Tiwi H2 project by theNT Government is another significant milestone for Provaris as we move forward with our development program. Major Project Status will deliver the project access to coordinated and streamlined Government agency support for future approvals and assistance with Federal Government agencies. Today’s announcement supports the Territory’s vision to be recognized as a leader in the transition to the green hydrogen economy.”

Northern Territory Chief Minister, Natasha Fyles, commented: “The award of Major Project Status by our government is recognition to the substantial economic and social benefits expected to be delivered by the Tiwi H2project and its potential strategic significance to the Northern Territory and Australia in developing a hydrogen production and export industry.”

Provaris’ Chief Development Officer, Garry Triglavcanin, added: “We look forward to a continuation of the support provided by the Major Projects team to advance the Tiwi H2 project which has identified the project as having significant future economic and social benefits to the Territory and traditional owners of the Tiwi Islands.”

The NT Government grants Major Project Status to projects that it regards as having significance, strategic influence, and prospective benefits for the territory. The advantages of Major Project Status include government-wide support, coordination, and facilitation, assistance in locating and mapping regulatory clearances, a dedicated project case manager, and facilitated communication with the Australian government.

As part of the Major Project Status award, Provaris and the NT Government have engaged into a Project Facilitation Agreement (PFA) to pursue the timely, efficient, and effective development of the Tiwi H2 project and maximize the economic and community benefits for the Northern Territory.

The Tiwi H2 project is consistent with the Territory’s Renewable Hydrogen Master Plan, which offers a framework for the development of a renewable hydrogen industry, with an emphasis on the enabling activities necessary to achieve private sector participation.

The Tiwi H2 project aims to use solar energy to produce up to 100,000 tons per year of green hydrogen for export markets, using Provaris’ GH2 Carriers to transport compressed hydrogen gas to the Asia-Pacific area.
It is predicted that 500 employment will be created during construction and 100 once the project is operational, with a project lifespan of over 30 years.

The Tiwi Islands location provides several advantages for Provaris’ compressed hydrogen delivery model, including existing port infrastructure at Port Melville, an existing port industrial area for hydrogen production, and a location along the most north-western coast of Australia – all of which give the Tiwi H2 project a significant competitive advantage for exporting compressed green hydrogen to the Asia Pacific region, including potential markets in Singapore, South Korea, and Japan.

Germany to use LNG in transition to green hydrogen