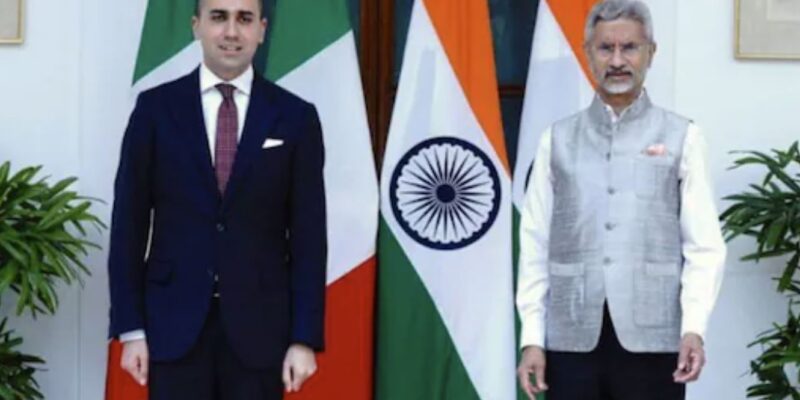 Following a meeting between External Affairs Minister S Jaishankar and his visiting Italian colleague Luigi Di Maio on Friday, the two countries agreed to strengthen ties in areas such as green hydrogen, biofuels, and energy storage.

The ministers also talked about the situation in Ukraine and the Indo-Pacific, promising to work together to address common dangers including terrorism, violent extremism, and cybercrime.

Di Maio welcomed his discussions with Jaishankar as “extremely useful” after arriving in India on May 4 for a three-day visit “in a Twitter post, adding that nations like India are crucial for Ukraine’s peace.

“A nice and constructive meeting with FM @luigidimaio of Italy,” the Indian minister tweeted. Our increased collaboration in cyber security, science and technology, and space has been noted. Agreed that boosting Italian interest in @makeinindia and technology transfer will help to strengthen our bilateral relationship.”

Concerned about the escalating humanitarian crisis in Ukraine, the two ministers called for an immediate halt to hostilities and emphasized the importance of maintaining the international order based on the United Nations Charter, with a focus on sovereignty and territorial integrity, according to a joint statement.

Furthermore, the statement emphasized the conversation between the two foreign ministers on regional and global issues of mutual interest, such as Afghanistan and the Indo-Pacific, as well as cooperation in multilateral organizations like the G20.

According to the statement, Jaishankar and Di Maio discussed a wide range of bilateral issues, including the progress made on the ‘Action Plan’ for 2020-2024, which was approved in November 2020.

The statement stated that both sides welcomed the deepening of bilateral business and investment ties and promised to expand them in new areas of mutual interest.

The ministers also addressed the execution of Prime Minister Narendra Modi’s India-Italy Strategic Partnership on Energy Transition, which he inaugurated during his visit to Italy last year.

According to the statement, both parties have agreed to co-host an India-Italy Tech Summit on Energy Transition and Circular Economy on November 17 in Delhi, in addition to investigating collaboration opportunities in sectors such as gas transportation, green hydrogen, biofuels, and energy storage.

Other countries that are assisting India

In terms of renewable energy, French Ambassador to India Emmanuel Lenain declared last year that France will continue to support India in attaining its ambitious objective of 500 gigawatts by 2030.

“We all have the same goal of increasing the percentage of renewable energy in the energy grid.” “France will fully help India in achieving the ambitious goal set by Prime Minister Modi at COP26 in Glasgow,” Lenain said at an international conference on One Sun, One World, One Grid (OSOWOG) hosted by the business association CII.

The United Kingdom has so far invested roughly £67 million in solar energy, water, climate change, and other initiatives. Furthermore, the Green Growth Equity Fund (GGEF), which got £120 million from both India and the UK, is the world’s largest single-country emerging market climate fund.

As a consequence, 413 MW of renewable energy capacity has been added, 1.14 million tonnes of greenhouse gas emissions have been reduced, and over 53,000 jobs have been created.

Similarly, USAID is working with the Indian government to help it accomplish its 2030 target of converting to non-fossil fuels in the power sector, as well as its 2022 national goal of deploying 175 gigawatts of renewable energy.

In addition, to encourage the use of sustainable energy technologies, the US Department of Energy and its Indian equivalent have organized a public-private task group on hydrogen and biofuels.

“Under the Strategic Clean Energy Partnership (SCEP), the Department of Energy, in collaboration with Indian counterparts, formed a new public-private Hydrogen Task Force as well as a Biofuels Task Force,” according to a statement made in September 2021. These organizations will aid in the expansion of renewable energy technology in order to decarbonize the energy industry.”

Researchers at NITK Surathkal have developed a prototype project that uses seawater electrolysis to create green hydrogen. It is a safe and effective method that requires very little saltwater pre-treatment. The majority of hydrogen originates from steam methane reforming (SMR), which emits tons of CO2.

Vasudeva M, assistant professor in the department of mechanical engineering and project coordinator, stated they got positive findings during laboratory testing for the proposed project. He claims that hydrogen synthesis by water electrolysis is a carbon-free technology that might be commercially viable provided cheap power and ample water sources are available.

Significant efforts are needed to design and scale-up novel and suitable catalysts and electrolyzers for seawater splitting to meet the requirement of industrial-scale hydrogen production, according to Vasudeva, who also noted that the institution is seeking funding from its alumni and well-wishers to complete the project.

One of the alumni has given Rs 5 lakh toward the project’s overall cost of Rs 1 crore. NITK Surathkal is also aiming to form partnerships with local businesses.

“In internal combustion engines or IC engines, hydrogen is widely employed. It’s also employed in the manufacture of fuel cells and process synthesis. Ammonia, for example, is made from hydrogen,” Vasudeva M. said.

Reducing the cost of electrolyzers is the key

The never-ending hunt for the most practical and ecologically benign fuel has thrust green hydrogen into the spotlight as the most important debate of the twenty-first century. Only around 1% of the hydrogen generated in the world today is green (i.e., derived from renewable sources), with the remainder being mostly grey (produced from coal or gas).

Hydrogen was employed as a fuel in the first internal combustion engine, which was built 200 years ago. In the 1960s, it was also employed as rocket fuel for the Apollo lunar missions. Then it faded as cheap oil became abundant, ensuring its marginal position. In the year 2020, the ICE and EV monopolists are the most vocal opponents of green hydrogen technology’s fundamental practicality.

“The best-case hydrogen fuel cell doesn’t win against the present case batteries, so then, clearly, it doesn’t make sense,” Tesla founder Elon Musk tweeted. While Herbert Diess, the CEO of Volkswagen Group, spoke on the topic, saying, “Green hydrogen is essential for steel, chemical, and aero, but it should not end up in automobiles.” Rolling out and transporting is far too costly, inefficient, sluggish, and complex.”

Green hydrogen is not only a cleaner alternative to natural gas, but it is also a suitable energy storage medium, making it beneficial for balancing intermittent solar and wind power. Furthermore, the impact of the Ukrainian war has driven up the price of fossil-fuel-based types of hydrogen generation, making green hydrogen’s steady but continuous decreasing price trend highly competitive.

Prime Minister Narendra Modi made five commitments at COP 26 in Glasgow in November 2021: achieve Net Zero by 2070 and 500 GW of non-fossil fuel generation capacity by 2030, meet 50% of energy needs with renewable energy, reduce the energy intensity of the economy by 45 percent, and reduce carbon emissions by 1 billion tons.

In order to fulfill these goals, India created the Green Hydrogen Policy, which aims to increase domestic green hydrogen production to 5 million tonnes per annum (MTPA) by 2030, half of the EU’s objective of 10 MTPA, and turn India into a green hydrogen export center. The government also hopes to create renewable hydrogen at a cost of $2.5 per kilogram by 2025 and $1 per kilogram by 2030, according to NITI Aayog CEO Amitabh Kant.

India is now one of the world’s top hydrogen users, with a demand of 6.7 MTPA, accounting for 7-8 percent of worldwide hydrogen consumption. According to a KPMG estimate, green hydrogen consumption in India might account for 20-30% of total hydrogen demand, which is predicted to almost treble to 12 MTPA.

The approach is sound since the manufacture of green hydrogen is energy expensive, needing 50 kWh for every kilogram generated by electrolysis. In the long run, eliminating the ISTS will reduce the delivered cost of bulk RE supply by 25%, broadening the scope of participation and perhaps establishing competition, as well as developing a substantial domestic market for the sale of renewable energy. The introduction of banking facilities will result in greater electrolyzer usage, which will assist to minimize the per-unit cost of green hydrogen. The provision of bunker facilities near ports will make it easier to export hydrogen.

During a recent important visit by a European Parliament delegation to India to discuss the India-EU Free Trade Agreement, the EU made it plain that they want to be independent of the Russian energy supply and saw India as a possible Green Hydrogen provider. The European Union has already revealed plans for a €300 million hydrogen investment package.

Greenko Group and John Cockeril of Belgium have announced plans to develop a two-gigawatt hydrogen electrolyzer gigafactory in India, the world’s largest outside of China. According to reports, this cooperation will cost around Rs 4,000 crore. In addition, Indian Oil Corporation, Larsen & Toubro, and ReNew Power have signed a binding term sheet to form a joint venture to develop India’s green hydrogen industry.

According to the India Hydrogen Alliance (2021), India will need to raise $25 billion by 2030 to develop a domestic hydrogen supply chain with a 25 GW electrolyzer capacity capable of producing 5 million tons of green hydrogen yearly. The cost of producing electrolyzers, which accounts for 25-30% of the unit cost, must be reduced by direct subsidies to manufacturers, such as inclusion in the PLI Scheme and lower import taxes. Furthermore, India must engage in ongoing innovation by boosting R&D funding and providing assistance for demonstration projects to ensure that essential hydrogen technologies are commercialized as soon as feasible.

“India has the potential to be a worldwide behemoth in the domain of aware, green, and sustainable enterprises,” said Erik Solheim, the UN Environment Programme’s 6th Executive Director. The key right now is to lower the cost of electrolyzers. India might soon become the Middle East of Green Hydrogen if we can cut our turnaround time and adopt these regulations.

Algeria has “great potential” to become a regional hydrogen hub