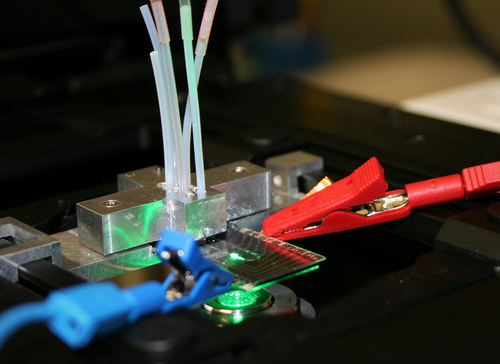 A recently concluded research project at the Technical University of Ilmenau with innovative technologies to increase electrochemical energy conversion for the use of renewable energies was a success.

The findings of the Institute for Thermo- and Fluid Dynamics’ research can be used to improve the efficiency of hydrogen production and the development of better fuel cells in the future. The German Study Foundation financed the research project as part of an Emmy Noether Young Investigator Group with a total of €1.4 million from 2014 to 2021. To ensure the stability of the energy supply, renewable energy must be stored using innovative technologies, such as hydrogen electrolysis and fuel cells, which are regarded as future technologies.

Under the guidance of Prof. Christian Cierpka, the TU Ilmenau’s Technical Thermodynamics Department is conducting basic research on innovative storage technologies such as thermal energy storage and liquid metal batteries. Chemical energy storage appears to be very promising for long-term energy storage. The Ilmenau junior research group, coordinated by Prof. Cierpka, sought to investigate the physical mechanisms underlying electrochemical energy conversion in order to improve the efficiency of the technology and consequently the performance of future generations of fuel cells and electrolysers.

Water is split into its constituents, hydrogen and oxygen, which are generated as gas bubbles on the electrodes during the electrochemical conversion of energy. The hydrogen produced in this manner can then be turned back into power in fuel cells in a carbon-neutral manner. However, gas bubbles sticking to the electrodes diminish the electrolyzer’s efficiency. For the first time, researchers from the TU Ilmenau demonstrated the influence of so-called thermal marangoni flows on bubble growth in experiments conducted in collaboration with scientists from the TU Dresden, the Helmholtz Center Dresden-Rossendorf, and the Leibniz Institute for Solid State and Materials Research IFW Dresden. They also researched how these currents influence the formation of the bubbles and their separation behavior from the electrodes in order to prevent bubbles adhering to the electrodes from lowering the effectiveness of the water electrolysis. They generated extra forces by using external Lorentz force magnetic fields to precisely remove the bubbles from the electrode surface. The result was that more hydrogen was created in a shorter period of time.

The Netherlands and Chile cooperate on hydrogen development