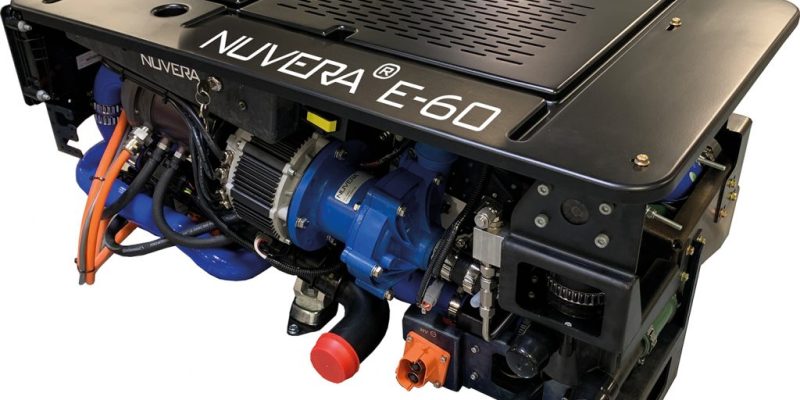 The hydrogen transportation industry is difficult to navigate and opaque. Forecasts collide with one another.

“The one constant is that the projections are just growing more positive,” said Lucien Robroek, president of Nuvera Fuel Cells in Billerica, Massachusetts, just outside of Boston. Nuvera designs and manufactures heavy-duty, zero-emission fuel cell engines for use in buses, tractors, (excavator) machines, and forklift trucks, among other applications. The American company was purchased by Hyster-Yale, materials handling vehicle manufacturer, some six years ago. ‘The market for hydrogen applications now is essentially non-existent, compared to the market in ten years,’ says Robroek.

“Nuvera is not a little start-up,” the CEO says. ‘We are a mature corporation with all serial production options, as well as a strong mother and growing partners.’ In this unpredictable economy, we exude confidence when we work together.’ Nuvera was founded in 2000 when two businesses, one from Italy and the other from Boston, united to work on hydrogen technology initiatives. The firm formed a unique product organization after being acquired by Hyster-Yale, with a focus on its patented Nuvera® E-Series fuel cell engines. Vehicle builders will be able to incorporate these engines into any electric drivetrain. ‘We have our own innovative and patented fuel cell stacktechnology, simply put, an electrochemical factory that converts hydrogen gas and oxygen into water and energy,’ says Robroek. All types of supporting components and control elements are arranged around these stacks so that manufacturers may integrate the entire system – the engine – into their cars.’

For a long time, the publicly traded Hyster-Yale Group (nearly 8,000 people, $2.8 billion in revenue in 2020) has sold electric forklift trucks alongside those with combustion engines. However, the corporation recognizes that the future will be all-electric. ‘It must thus be able to use hydrogen gas for emission-free driving in addition to being totally battery-powered,’ explains Robroek. ‘You can’t cope with mere batteries that have to go to charging stations over and over, especially with larger trucks and machinery.’ ‘Or it’s just not practical to provide enough charging capacity in the right area.’

Following the acquisition, Nuvera focused on products for Hyster-Yale, utilizing all of its expertise and experience. Beyond that, the firm now provides the developed engines: larger volume is required to cut prices. ‘We have a great relationship as a group, and we support each other when we can.’ Nuvera, on the other hand, has its own personality and is quite self-contained.’ There is no compelled shopping, according to Robroek. If Hyster-Yale discovers a product that is better suited to a given use, it may choose for it.

Last year, Nuvera launched its own hydrogen engines on the market. Production on a large scale is yet to begin. ‘Everything is new, including our consumers, so things are moving slowly.’ They’re going through the same transition that Hyster-Yale has: clients wanted to go to hybrid or all-electric battery applications initially, and are now taking the next step carefully toward a hydrogen engine. They’re discovering new options all the time. Manufacturers purchase a single engine from us, install it in a car, and test it. We have a crew ready to assist them all around the world. Customers will have to wait another year and a half before they can opt to outfit a whole fleet or product group with it. Some have progressed further, but this is not a high-volume market.

More than a hundred client engagements are continuing, according to Robroek, which extends beyond merely having an initial chat. It’s a comprehensive examination of where hydrogen applications come in, as well as how they’ll operate with the specified duration and intensity of use. “We’re still planting and only have a few concrete applications that we can talk about openly, such as our engines for Hyster-Yale vehicles and harbor trucks from US Capacity Trucks.” Zhejiang Runfeng Hydrogen Engine Co. in China provides hydrogen systems for electric buses that employ our technology.’

According to Robroek, it takes a lot of investment and faith in the future, as well as a strong parent company with patience. For example, sales of Nuvera BBRs (battery box replacement units), such as the entire systems for electric forklift trucks sold by Hyster-Yale, are already pouring in.

Robroek has previously worked with Hyster-Yale in Nijmegen on Big Truck Products for many years. When Rajiv Prasad, then-CEO of Hyster-Yale Group, asked him back in 2018, he had just started working as general manager at transport business De Rooy. Whether Robroek planned to establish a comprehensive product line at Nuvera, as he had done in Nijmegen. Robroek reasoned that it was wonderful to work on items that mattered and that the world needed to become more sustainable, so he answered yes.

Purchasing, product development, production, HRM, and ICT are all housed in the main location in Billerica (about 160 workers). The refurbished and extended Nuvera Fuel Cell Engine Test Module was recently placed in Osio, near Milan, and is an excellent base for Europe (about 18 persons). opened. On a maximum of eight motors, all conceivable endurance tests and simulations for client applications are run simultaneously. A few personnel in China keep an eye on the situation. China appears to be abandoning battery-powered plug-in electric buses in favor of hydrogen-powered buses. The E45 and E60 engines from Nuvera have previously been certified in that market, but it is a fickle one. ‘We’ve already started making plans to centralize manufacturing for prospective Chinese clients.’ However, the subsidy regulations now mandate that you manufacture locally in designated demo zones. Given the modest volumes, that doesn’t work for us yet.’

Large, established parties are now making noise in the hydrogen market: Daimler, a German car and truck manufacturer, and Volvo, a Swedish truck manufacturer, recently announced that they will begin producing fuel cells for hydrogen trucks in Europe in 2025 and will set up a separate factory for this. They earlier created the cellcentric joint venture. Under the moniker Symbio, tire producer Michelin and auto components manufacturer Faurecia want to mass-produce hydrogen fuel cells on a big scale.

Robroek, on the other hand, is certain that there is still place on the market for strong technology, even from smaller, specialized companies. ‘We aim to avoid focusing too much on huge OEMs that do everything in-house.’ There are, however, several more uses. I’m referring about markets for more complicated, sometimes larger machinery and vehicles, where you don’t sell tens of thousands of engines per year but where we as an independent supplier are quite interested.’

Nuvera also stands out since it can now create all of its motors in sequence and is becoming increasingly automated. ‘Many new businesses are still in the prototype stage,’ says Robroek. Our goods are ready to be manufactured and marketed, complete with full after-sales and servicing.’

In recent decades, there have been numerous ups and downs in terms of interest in hydrogen, however, the buzz appears to have gone now. Vehicle makers must become more environmentally conscious and take applications more seriously than ever before. Energy firms are aggressively investing in infrastructure, which is assisting. More hydrogen fueling stations are appearing slowly but steadily. However, it’s still a bit of a chicken-or-the-egg situation: the higher the production volume and the more applications, the more appealing and economical hydrogen solutions become, as well as the more infrastructure investment.

According to Lucien Robroek, the market is “nearly non-existent this year when compared to the market in 10 years.” Every time a client answers “yes” following a test phase and places follow-up orders for the first dozens of engines, it’s really thrilling for us. Parties must reawaken each other’s zeal. The more concrete customer projects we can display, the better. Until now, everyone had kept a low profile.’