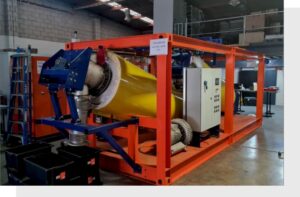 Patriot Hydrogen has secured its first customer with the signing of a formal agreement to supply two Patriot P2H Hydrogen Units to Port Anthony Renewables Limited.

Patriot Hydrogen “P2H” (Patriot to Hydrogen) Units will be located in Port Anthony, 180 kilometers south of Melbourne, and will provide green renewable hydrogen to domestic and future international markets. Patriot Hydrogen “P2H” Units will initially produce 1 ton of hydrogen per day – a total of 2 tonnes per day – with output expected to increase up within the following three years.

Pyrolysis is used in the new technology to transform waste materials to gas (hydrogen-rich gas or pyrolysis gas) and carbon biochar. The gas can be utilized in a variety of ways, such as fuel for a thermal oxidiser that generates steam, heat, or combined heat and power, or as fuel for internal combustion technology that generates combined heat and power.

Further processing of the hydrogen-rich gas can be used to extract hydrogen for domestic and export sales. Biochar is a byproduct of this process that can be marketed and used in a variety of industrial and agricultural purposes. Patriot Hydrogen will create liquid hydrogen for export and domestic markets, as well as biochar for domestic markets. The liquid hydrogen will be used to fuel large vehicles, buses, boats, trains, and autos. Globally, major economies are rapidly turning to renewable energy sources in order to reach their zero-emission commitments.

The increased demand for hydrogen in particular is reflected in the announcements of global oil companies such as BP and Woodside regarding their hydrogen ambitions. According to the Australian Renewable Energy Agency, global demand for hydrogen exported from Australia might reach over 3 million tonnes per year by 2040, representing a potential yearly economic benefit of up to $10 billion. As a result, Australia has made hydrogen a priority, with the CSIRO releasing a National Hydrogen Roadmap and the Australian government establishing a National Hydrogen Strategy.