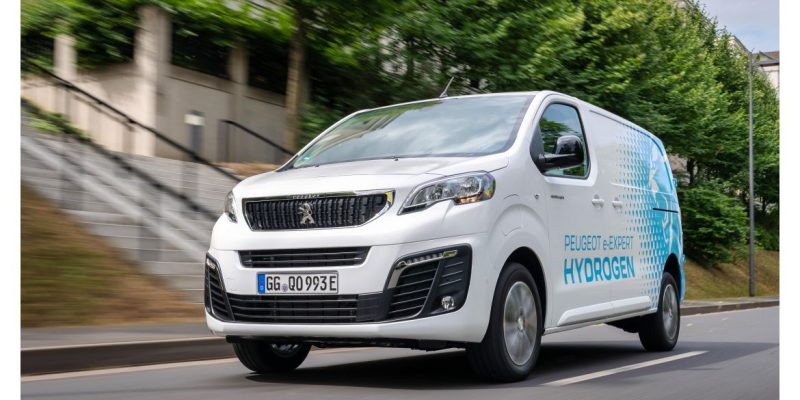 As one of the first automakers, PEUGEOT now offers the Peugeot e-Expert Hydrogen, an electric van with a hydrogen fuel cell as standard. With the introduction of this new model, Peugeot is able to offer an even wider selection of emission-free vehicles.

For the delivery of its hydrogen fuel cells, which are made in Peugeot’s Vénissieux facility in the outskirts of Lyon, Symbio is collaborating with the automaker.

The fuel cell is made up of many current-generating cells stacked on top of one another. A “battery” is made when they are put together. Two elements, oxygen, and hydrogen (the fuel found in the tanks), can interact chemically in a cell (contained in the ambient air). In order to provide the electric engine with the power it needs to move the car, the cell combines a number of other cells.

Thanks to a process that creates an electric current while only releasing water, this technique is guaranteed to emit no CO2. The following is the outcome of the reaction in a cell:

Fuel for the fuel cell in the Peugeot e-Expert Hydrogen is stored in a tank made up of three canisters with a combined capacity of 4.4 kg of hydrogen at 700 bar of pressure. The tank is concealed beneath the floor of the back compartment and does not obstruct the load area.

A 10.5 kWh rechargeable lithium-ion battery with a 90 kW power output is coupled with the fuel cell. In various driving stages, it also feeds the electric engine from underneath the seats. It is powered by an onboard 11 kW three-phase charger that is housed in the engine compartment.

A permanent magnet electric engine with a combined output of 100 kW and 260 Nm is powered by these two energy sources. This electric drive train, which is mounted on the front axle, is comparable to the PEUGEOT e-EXPERT (battery-electric model), which distinguishes out in particular due to a gearbox tailored to the loading restrictions characteristic of utility vehicles.