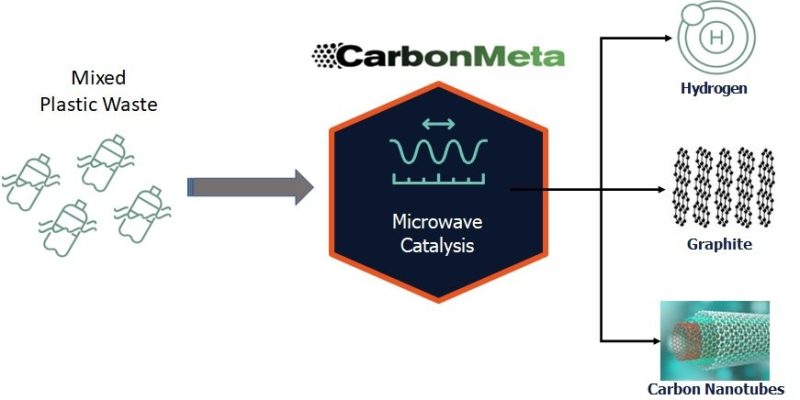 CarbonMeta Research Ltd., a wholly-owned subsidiary of CarbonMeta Technologies, is commercializing a groundbreaking technology dubbed “microwave catalysis” from the University of Oxford, and the company is planning to process waste plastic at scale in custom-designed microwave machines, yielding high-value products for industry.

One metric ton of plastic combined with two hundred kilograms of iron powder catalyst can selectively produce enough hydrogen to heat approximately two hundred homes, as well as produce 900 kilograms of graphite and carbon nanotubes that can be used to construct battery technology for electric vehicles.

One ton of plastic may be transformed in two hours on average, with the material reaching temperatures of up to 600 degrees Celsius.

To scale up this technology, the company is forming commercial relationships with multinational multi-energy providers in Europe, among others. The company’s most recent venture is an evaluation project in Spain that will examine how various combinations of mixed plastics trash perform in the new process and how to achieve the highest results.

CarbonMeta’s objective is to “upcycle” plastic and construction waste in order to combat the escalating pollution and climate concerns in the world. The company’s technology will facilitate the shift to two major sources of renewable energy, including hydrogen for transportation or home heating and batteries for electric vehicles. The company, headquartered in Woodinville, Washington, is expanding its global presence mostly because to this British innovation.

Oxford don Professor Peter Edwards, who has undertaken over two decades of study in environmentally-focused chemistry, is the brains behind the technique. Among his other accomplishments are the production of aviation fuel from carbon dioxide and the extraction of green hydrogen from fossil fuels. In 1996, he was elected a Fellow of the Royal Society.

Commenting, Lloyd Spencer, CEO of CarbonMeta Technologies, said: “Our project in Spain is the first step on the road to fully commercialising what is a breakthrough technology.

“While a big part of sorting out plastic pollution is simply to stop producing so much plastic, we still need a sustainable process for dealing with what is still manufactured.

“With US entrepreneurship and investment, British research and European business support, this method of making something clean and useful out of problem plastic has potential global reach.”

Professor Peter Edwards added: “This is a ground-breaking solution to the global challenge of plastics waste. It is thrilling for myself and my colleagues to see this technology move out of the limited capacity of a chemistry lab into testing at a genuinely commercial scale.

We want the most robust possible figures on yield, so that we can demonstrate the potential of our microwave catalysis process to place plastics waste as a key contributor both to hydrogen energy and battery technology.”

The results of the European research will be released in the fall of 2022, and subsequent commercial agreements with global energy companies that could benefit from the technology are anticipated.