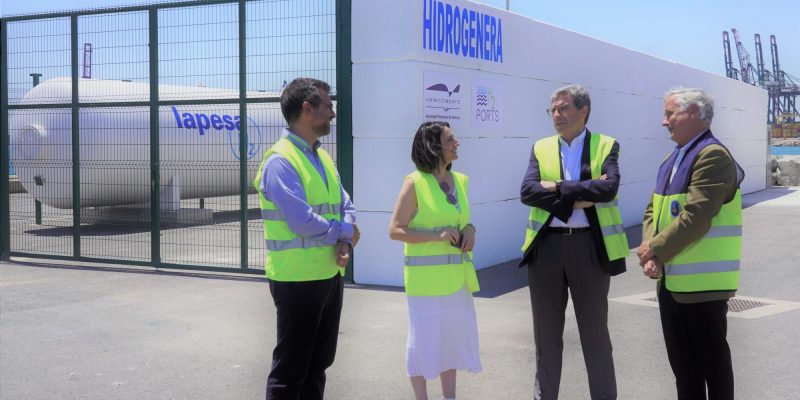 With the arrival of the mobile unit containing the dispenser, the Port of Valencia will become the first location in Europe to utilize hydrogen technologies to lessen its environmental impact.

The president of the Port Authority of Valencia (PAV), Aurelio Martinez, stressed that “this is one more step in the different actions that Valenciaport is carrying out to be an area that combines sustainability and growth. For the PAV, the fight against climate change and decarbonisation is a priority, as demonstrated by all the projects we are carrying out to meet the objective of being an emission-neutral port by 2030. Our strategy is based on facts such as this hydrogen station which positions us as the first European port to use this technology”.

The councillor for Territorial Policy, Public Works and Mobility, Rebeca Torró, stressed that the project is an example of the commitment of the Valencian Community and the Port of Valencia to “develop actions in the logistics and mobility area that will allow us to have an emission-neutral future and attract talent with initiatives that combine sustainability, innovation and clean energy”. The councillor stressed the commitment of the Generalitat to “promote the deployment of new technologies and sustainable energy sources applied to industry that place the Valencian economy in a position of competitiveness in a strategic area of the present and future”.

The hydrogen station will provide the necessary fuel to ensure the uninterrupted operation of the H2Ports project’s equipment. The machinery or prototype of the Reach Stacker vehicle or container stacker that will be powered by this energy and tested at MSC Terminal Valencia is one of the pieces of equipment now in the construction phase. The other piece of equipment will be an adaption of a regular 44 tractor unit equipped with a fuel cell for testing in loading and unloading operations at Grimaldi Group’s Valencia Terminal Europa.

The hydrogen supply station (HRS) was designed and constructed by the National Hydrogen Centre. It will consist of a fixed part that will be dedicated to the reception, storage, and compression of hydrogen up to delivery pressure (both of which are already installed at the Bracet de la Xità), and a mobile part that will store the compressed hydrogen and include a hydrogen dispenser for refueling port machinery. The HRS will include a two-stage, water-cooled, piston-type hydrogen compressor with integrated heat exchangers, two sets of hydrogen storage cylinders at 300 and 450 bar, and a dispenser at 350 bar for heavy vehicles. Carburos Metálicos is in charge of the installation of the hydrogen plant in the Port of Valencia and will manage it for a two-year pilot term, thereby ensuring the proper operation of the equipment involved and the loading of hydrogen. Similarly, Carburos Metálicos will provide renewable hydrogen and build the required logistics for the port machinery supply.

The initiative that will deliver hydrogen

“H2PORTS – Implementing Fuel Cells and Hydrogen Technologies in Ports” is the name of the European project that will enable Valencia and its port to work and move port machinery with hydrogen. It is an effort administered by the Valenciaport Foundation in close collaboration with the Port Authority and funded by the European Union’s Clean Hydrogen JU programme. Its primary purpose is to test and evaluate hydrogen technologies on port equipment that will give relevant, real-world solutions without compromising the performance and safety of port operations or causing any local emissions.

Valenciaport is a hydrogen roadmap benchmark

Valenciaport is committed to combating climate change and reducing carbon emissions through a variety of activities. Within the framework of the “Hydrogen Roadmap,” the Spanish government has recognized the PAV’s work on green hydrogen as a benchmark. Thus, the PAV is one of the institutions, along with the València City Council, the Generalitat Valenciana, and the Universitat Politécnica de València, that comprise the ‘Valencia Hydrogen Valley’ strategy, which aims to coordinate, create synergies, and promote research into green hydrogen in the transport and logistics sector in Valencia and its metropolitan area.

In addition, the PAV has struck an alliance with the Hamburg Port Authority (HPA) to generate projects for this renewable energy with the assistance of European Union programs. Valenciaport is extremely involved in local and regional projects that encourage this partnership, as well as on a European and global scale, which is why it is a member of both the Clean Hydrogen Alliance and the Global Ports Hydrogen Coalition. In addition, it has established a global advisory group comprised of around sixty-five individuals and thirty ports that is striving to develop the hydrogen value chain for ports.

To position itself as a green port at the service of the citizens and to be 20 years ahead of the European Green Pact’s ambition, the PAV is planning a set of measures, in conjunction with the port community, aimed at combating climate change and decarbonisation. To this end, it has launched projects such as the electrical substations of the Port of Valencia, the location of photovoltaic plants in Valencia or Gandia, the installation of wind energy, the use of alternative fuels such as LNG, the commitment to the railway, the electrical connection of the Port of Sagunto, and actions to improve energy efficiency.

Celsa launches project for revalorization of its waste with renewable hydrogen