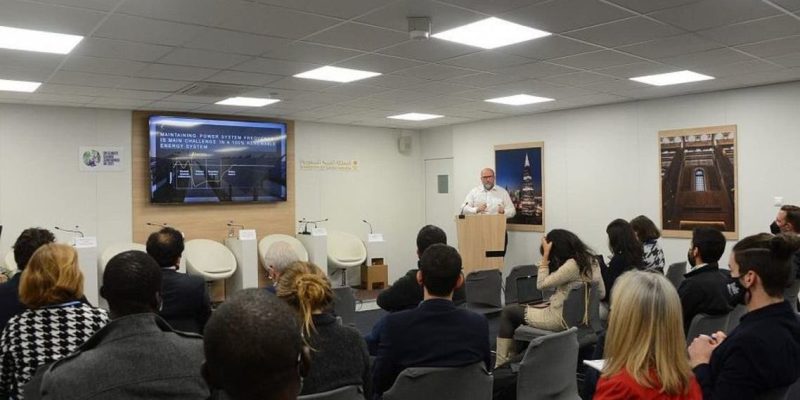 During a lecture titled “Designing a 100 percent Renewable Energy System from Zero – Marhaba NEOM,” the Saudi pavilion at the United Nations Climate Conference COP26 shed light on renewable energy and hydrogen production projects in the city of NEOM, which was attended by a crowd of interested and visitors to the pavilion.

The presentation focused on the cutting-edge and ecologically beneficial technology that will be employed in the NEOM project, which intends to make the metropolis the first and most prominent source of clean energy in the world by relying totally on renewable energy.

The NEOM project is part of the Kingdom’s Vision 2030, which aims to transform the Kingdom into a leading global model by focusing on localizing value chains in industries and technology, such as the projects that NEOM plans to establish to invest in a mix of solar and wind energy with the goal of making it a leading region in the world based entirely on renewable energy.

Details of the project design stages were discussed during the lecture, including the generation and marketing of clean energy, achieving balance and integration with traditional systems, pricing and value of the clean product, distribution and sales, as well as developing and approving regulations and laws governing the field.

The lecture focused on explaining the hydrogen project, which is the world’s largest of its kind. Its significance stems from its alignment with NEOM’s efforts to achieve global leadership in the production of green hydrogen and green fuels, as well as its importance as a focal point in NEOM’s journey to become the world’s most important destination for providing sustainable solutions in a way that attracts investors and better minds from all over the world.

In the same vein, the lecture discussed NEOM’s $5 billion agreement with Air Products and ACWA Power to build a facility in NEOM to produce hydrogen in an environmentally friendly manner and export it to the global market, with the goal of providing sustainable solutions to the global transportation sector and addressing climate change challenges through practical solutions to reduce carbon emissions.