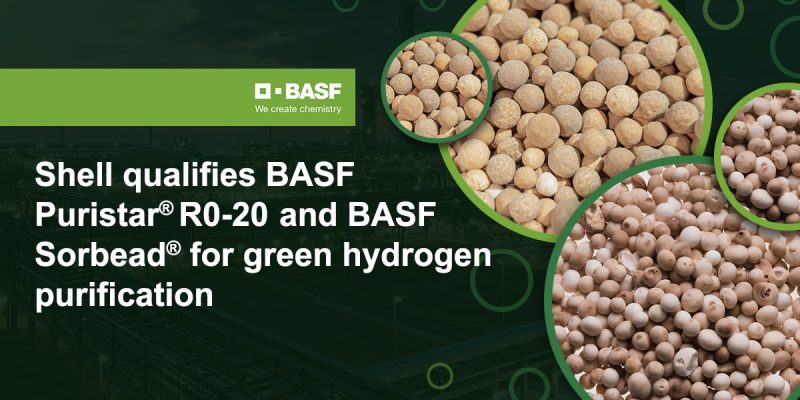 Puristar®R0-20 and Sorbead® AdsorptionTechnology from BASF has been evaluated and de-risked for use in the generation of green hydrogen in collaboration with Shell.

The two processes enable the purification and dehydration of the water electrolysis process’s resultant hydrogen stream, which may then be transported and liquefied for use as a fuel source or chemical feedstock. As of the right moment, Shell has the Puristar and Sorbead technologies in its portfolio for possible usage in its international green hydrogen projects.

Water and residual oxygen are contaminants present in the hydrogen product stream from water electrolysis that must be eliminated before the hydrogen can be used or processed further. In the DeOxo Unit, the Puristar R0-20 catalyst first reduces oxygen in the water to eliminate it. Sorbead Adsorption Technology is used to dehydrate the hydrogen after the DeOxo process. After being purified, hydrogen can be employed as a fuel source or a chemical feedstock. A novel DeOxo design tool that is especially targeted at improving DeOxo units working downstream of an electrolyzer has been developed by BASF through recent R&D and trial operations. Smaller DeOxo vessels may now be designed thanks to this new modeling tool, which improves the project in terms of CapEx and OpEx.

Low temperatures and little precious metal are required for the extremely effective PuristarR0-20 catalyst to function. In addition, BASF Sorbead Adsorption offers a number of benefits for eco-friendly hydrogen applications, such as a low energy footprint in comparison to substitute materials, dependability, ease of use, high water capacity, and lower regeneration temperatures than with activated alumina or molecular sieves. Long life, operational turndown flexibility, and instant on-spec gas upon starting are further benefits for customers.

“Shell and BASF both have the goal of achieving net-zero emissions in the future. The de-risking of Puristar R0-20 and Sorbead Adsorption Technology for Shell’s projects will help us on our path because green hydrogen is a key component in attaining this aim “Detlef Ruff, Senior Vice President of Process Catalysts at BASF, made the statement.

RWE and ArcelorMittal to jointly develop and operate hydrogen facilities