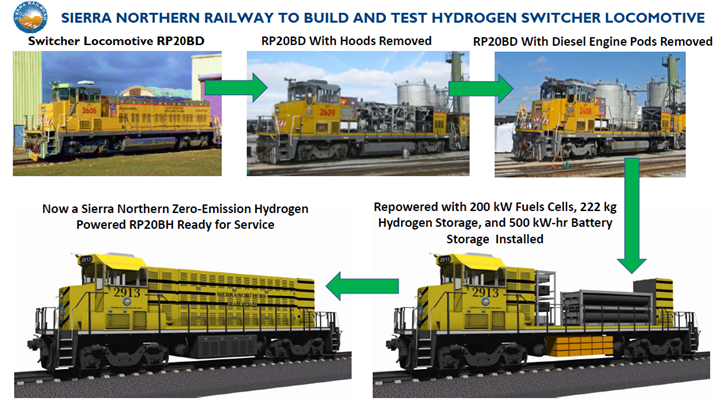 The California Energy Commission voted to award approximately $4,000,000 to Sierra Northern Railway and GTI for the design, integration, and demonstration of a hydrogen fuel cell switching locomotive at the Port of West Sacramento.

The locomotive will demonstrate the potential of hydrogen fuel-cell technology to reduce air pollution and greenhouse gas (GHG) emissions from transportation.

The funding will be utilized to retire a Tier 0 diesel locomotive and replace it with a zero-emission, hydrogen-powered switching locomotive. The project comprises the combination of modern hydrogen fuel cell, hydrogen storage, advanced battery, and systems control technologies in order to give an alternative to diesel-powered locomotives that are less environmentally friendly.

The completion of the new zero-emissions, hydrogen-powered switcher locomotive will eliminate the requirement for up to 10,000 gallons of conventional diesel fuel each year. The demonstration will aid in the improvement of local air quality, as well as the decrease of greenhouse gas emissions, noise, and stink.

The overarching project aims and goals are:

• To design a safe and dependable locomotive driven by a hydrogen fuel cell.

• Construct the locomotive and show its functionality in a real-world setting.

• During the demonstration phase, collect data to provide insight into the performance, operations, and costs of this technology.

• To support commercialization efforts to increase the use of hydrogen in the rail industry.

In the near future, the demonstration and validation of this technology will build a foundation for its global commercialization. Because locomotives are federally regulated, it is difficult to encourage railways to adopt innovative environmental technologies. Potential markets for new hydrogen locomotives in California include more than 260 switcher locomotives and as many as 500 intrastate locomotives.

To accomplish the state’s environmental goals, it is crucial for California to urge the rail industry and all other transportation sectors to decarbonize their operations. Short-line and switching locomotives account for a considerable amount of the State’s overall locomotive energy consumption since they transport a substantial portion of California’s freight and operate on the first and last miles of the national freight network.

“We are pleased to partner with this great team to build and test this innovative zero emission switching locomotive. We believe this project will help lead the switching locomotive industry to an emissions free pathway in all ports in the State of California.” Said Kennan H. Beard III, President of Sierra Northern Railway.

“We look forward to being able to provide leadership on this important State effort with this demonstration project,” Beard said.

“The rail sector and goods movement in ports are challenging applications for low-carbon energy because of they often require near-continuous operation and high power levels,” notes Ted Barnes, Director of R&D at GTI. “This project directly addresses those issues as we seek to advance technologies that can enable ports as high-throughput clusters for affordable, low-carbon hydrogen and achieve scaled demand across multiple applications.”

Adam Bennett, General Manager Railpower Tech LLC said “We are excited to be part of an ambitious plan to design, build, and operate a safe and dependable hydrogen-powered switch locomotive.”

Tim Sasseen, Ballard Sales Manager for California said, “We are excited to be working with Sierra Northern Railway toward demonstration of a fuel cell-powered switching locomotive at the Port of West Sacramento. This is another sign of increasing momentum in the deployment of zero-emission fuel cell propulsion solutions in the rail industry across numerous geographies, including North America. Fuel cells offer a compelling value proposition for Medium- and Heavy-Duty Motive applications, including rail, bus, truck and marine vessels, which we are keen to demonstrate for a switching locomotive, in addition to our work powering passenger and freight trains.”

“Valley Vision is excited to be part of the test hydrogen switcher locomotive team. We believe that our region should be an innovation test bed for new, clean transportation technologies and that this effort demonstrates the Capital region’s collaborative and dynamic capabilities. Advanced transportation technologies are a key component to meeting climate goals and also support an innovative regional economy.” Said Evan Schmidt, Chief Executive Officer of Valley Vision.

“OptiFuel Involvement with the Sierra Northern Railway’s team is a continuation of OptiFuel’s goal of decarbonizing the rail market over the next 15 years”, said Scott Myers, President of OptiFuel Systems.