Stellantis CEO Carlos Tavares announced a mass production of Peugeot, Citroen, and Opel light commercial cars in a hydrogen-powered variant with a fuel cell during his visit to the Hordain factory in the northern Hauts-de-France region.

“The management and staff at Hordain have made their facility the first in the world to mix three sources of energy, which was made possible by the adaptability of our manufacturing system. I’m really proud of their efforts. The decision made today shows Stellantis’ dedication to promoting low-carbon mobility based on the “One Company” ethos and investing in the newest technology in France, Tavares stated. In a transition that was managed in collaboration with our social partners at our 12 industrial sites spread across seven French regions, where we are delighted to have established historical roots, Stellantis has been successful in moving on to the next chapter in automotive history.

The multi-energy line at the facility, which now manufactures the “K-Zero” with an electric motor and combustion engine on a regular basis, will be used to build these hydrogen-powered vehicles. The hydrogen-powered models will then proceed through the customary stages of paintwork and assembly, on the same production line as combustion engines and electric vehicles, using a reinforced platform from body-in-white forward, before they enter the new 8,000 m2 facility that focuses solely on the final tuning.

In contrast to the previous small-scale procedure, where the fuel cell was installed at a Rüsselsheim pilot workshop, a specialized team will install the tank, the supplementary batteries, and the fuel cell on a production line at the Hordain facility.

This €10 million investment and industrialization of hydrogen-powered light commercial vehicles mark a significant development for Hordain, where 43% of models for the Peugeot, Citroen, Opel, Vauxhall, Fiat, and Toyota brands are already offered in a zero-emission electric form.

Long-distance freight professionals needing a longer range (400 km), the fastest charging time (3 minutes), and no compromises on charge capacity are the target market for the fuel cell-powered “K-Zero” cars (1000 kg of payload).

Stellantis is the first company to commercialize this kind of car worldwide, having done so in 2021.

The Stellantis commercial vehicles division’s industrial strategy is centered on the 1994-opened Hordain plant. The “K-Zero” range of light commercial vehicles and passenger cars are assembled at this benchmarking facility. Hordain produces 628 vehicles each day while working 2,440 workers across three shifts. 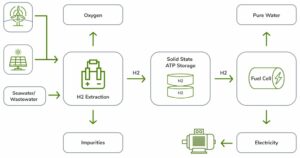