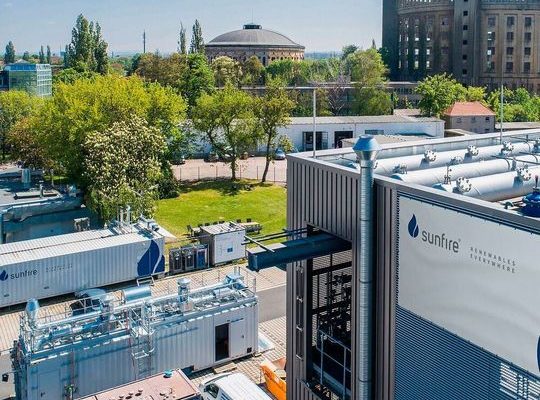 Sunfire, a Dresden-based high-tech firm, intends to increase its investment in the growing hydrogen industry.

The German news agency’s executive director, Nils Aldag, stated that over 100 million euros in investments are planned. Subsidies would also be available. The business aims to develop a new facility and electrolysers for hydrogen generation in the next year and a half. The plants should have a 500 MW output in the first stage. Sunfire also plans to expand its workforce to more than 400 workers by 2023, from the present 260.

According to Aldag, the specific location of the new facility has yet to be determined. “The final choice on where to hold the event has yet to be made.” However, the Sunfire CEO underlined that such an industrial plant could not be erected in the heart of a city. As a result, research and development should continue to take place in Dresden, which is adjacent to the Technical University (TU) and organizations like Fraunhofer.

In Saxony, hydrogen already plays a significant role, and the Free State has numerous initiatives in the European hydrogen alliance. Sunfire is part of the “H2-Sara” network, which will develop electrolysers and fuel cell manufacturing systems. In the “LHyVe” project, a complete value chain of green hydrogen will be developed in the Leipzig region, from production to storage and transportation to ultimate consumption, and will be networked with other European initiatives. According to the Federal Ministry of Economics, the German government has invested more than eight billion euros in 62 hydrogen projects.

Sunfire began with the intention of employing the so-called power-to-liquid process to synthesize gasoline, diesel, or kerosene. Hydrogen is produced in the initial phase of this process, and then further developed via synthesis. Sunfire eventually began to grow and create the heart of hydrogen generation through corporate takeovers. The issue of hydrogen has acquired so much traction in the last year that we are now focusing solely on it, according to the report.

Sunfire intends to compete with other electrolysis system manufacturers like as Siemens, Linde / ITM, and Thyssenkrupp on the market. Aldag believes that the steel industry, as well as the aviation and shipping industries, will benefit from hydrogen utilization. Sunfire has completed around 70 projects in 24 countries to far, but does not yet produce on a big scale.

The issue with electrolysers is that they require a lot of power that is as green as feasible. According to Aldag, Germany does not currently have enough renewable energy electricity to meet this need. “We need to take the systems to locations where green power is cheap and plentiful and transform it into a transportable commodity,” says the researcher. Countries like Denmark, Sweden, and Norway were mentioned by the Sunfire CEO. With the aid of hydrogen, iron ore might be transformed into “clean” steel pellets, which could then be sent back to Germany for use in the steel industry. Aldag is certain that this can be accomplished in two to three years.