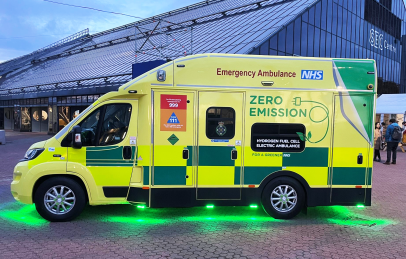 Visitors to COP26 in Glasgow had the opportunity to see the world’s first hydrogen-fueled ambulance, which was developed by ULEMCo, the UK’s hydrogen fuel pioneer, and its partners.

Interest is high in the functional prototype vehicle, which features a hydrogen fuel cell motor, is easy to refuel, and has a range of up to 300 miles.

The ZERRO project, named for the Zero Emission Rapid Response Operations ambulance, was initiated by Yorkshire Ambulance Service, whose range needs necessitate the flexibility that hydrogen can provide. In the meanwhile, it will be trialed by the London Ambulance Service, which will receive access to public refueling stations throughout the city. The project, headed by ULEMCo and financed by Innovate UK and NHS England & NHS Improvement, aims to demonstrate best-in-class zero-emission operation for urban and rural use.

The ambulance incorporates innovative features such as a hydrogen fuel cell range extender with an electric motor, a low-frame chassis, and a custom lightweight ambulance body. Its unique features, such as a low access floor and a frame-based body, enable it to meet the service’s payload needs, while the hydrogen fuel cell ensures the asset’s productivity through fast and flexible refueling.

In Glasgow, the prototype ambulance and hydrogen fuel cell modules are on display (see pics). on an exhibition display for the NHS. International leaders and climate scientists will get a close look at the ambulance.

Following COP26, the Ambulance will be trialed in London to assess its operating flexibility and suitability for purpose. NHS England and NHS Improvement intend to collaborate with ambulance trusts to conduct trials of the ambulance throughout the country and to build a strategy for rolling out zero emission ambulances.

“A great deal of hard work from the industrial partners has gone into bringing the ZERRO project to this stage. We believe this is a key milestone in the development of hydrogen mobility, and shows what can be achieved today to achieve zero emissions from HGV and utility vehicles,” said Amanda Lyne, Managing Director ULEMCo

“With further investment and infrastructure, it is hoped that zero emissions ambulances could be deployed throughout the NHS,” said an NHS Spokesman.