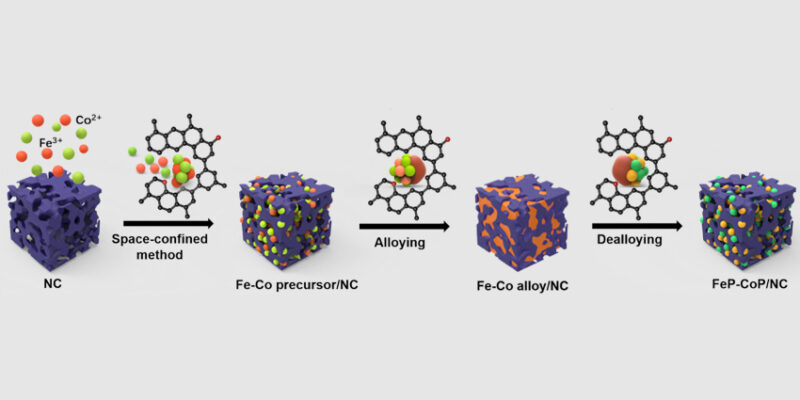 A group of researchers led by Dr Ning Yan of the Van ‘t Hoff Institute for Molecular Sciences at the University of Amsterdam present a viable membrane-free approach to water electrolysis utilizing earth-abundant catalysts in a recent Nature Communications study.

Transitioning to a hydrogen economy is critical for promoting sustainable energy policies and combating climate change. Hydrogen produced by water electrolysis using renewable electricity can be used as both a clean energy transporter and a reagent in the production of bulk compounds from CO2. Water electrolysis on a large scale is a critical technique for achieving these objectives. However, despite the fact that electrolysers have been around for almost 200 years, the technology is still experiencing significant problems. For example, traditional alkaline electrolysis is better suited to low current density and low pressure, but the new proton exchange membrane (PEM) electrolyser necessitates the use of scarce noble metal catalysts as well as considerable water purification.

Now, a team of researchers lead by Dr. Ning Yan of the University of Amsterdam’s Van ‘t Hoff Institute for Molecular Sciences has developed a novel form of membrane-free electrolyzer that can split water into hydrogen and oxygen at high current density while utilizing just earth-abundant catalysts. The work, which was done in collaboration with academics from Wuhan University and Wuhan University of Technology, was just published in Nature Communications.

The new electrolyser has a sandwich-like architecture and is made up of two identical and distinct sections. Two solutions flow through this sandwich: a hydrogen-rich catholyte and an oxygen-rich anolyte. During operation, the anolyte and catholyte cycle back and forth, reversing the responsibilities of each compartment. As a result, the innovative electrolyser produces hydrogen gas with a purity of more than 99 percent.

To achieve continuous performance, the electrolyser is cycled and the electrode catalyst is bifunctionally active. It operates equally well in both the water reduction and water oxidation reactions, according to tests. One significant advantage is that no noble metals are required. The cell instead employs a modified version of the nitrogen-doped catalysts developed previously by Yan and Prof. Gadi Rothenberg for fuel cell and supercapacitor applications. PhD student Jasper Biemolt has now utilised these very porous and structured materials as supports for iron-cobalt alloys and their phosphide derivatives (see first image).

Yan and Rothenberg are conscious that scaling up this cell technique will necessitate a significant amount of additional work. The collaborative effort will continue to address fundamental and application problems such as a techno-economic analysis and the dynamic behavior of the working and auxiliary electrodes in tap water electrolyte.