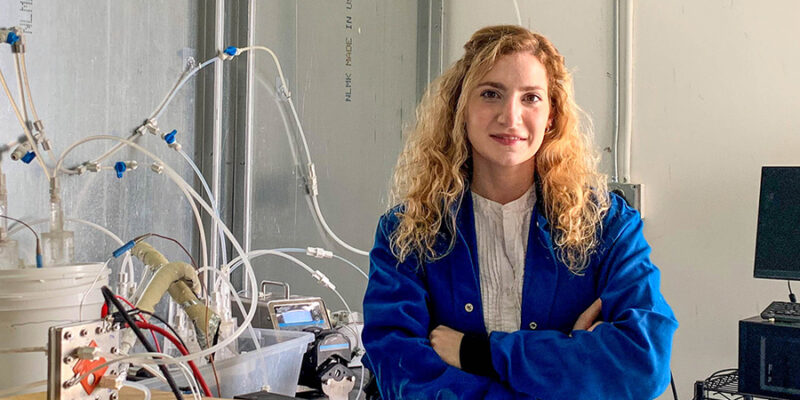 A team from MIT develops feasible guidelines for hydrogen generation from scrap aluminum.

As the world moves away from fossil fuels, numerous academics are examining whether clean hydrogen fuel may play a larger role in industries ranging from transportation and manufacturing to construction and power generation. It could be utilized in fuel cell vehicles, boilers that generate heat, gas turbines that generate electricity, and systems for storing renewable energy, among other applications.

However, while utilizing hydrogen does not result in carbon emissions, manufacturing it often does. Today, nearly all hydrogen is produced using fossil fuel-based techniques that collectively account for more than 2% of global greenhouse gas emissions. Additionally, because hydrogen is frequently produced in one location and used in another, its use poses logistical issues.

Another method of creating hydrogen comes from an unexpected source: aluminum reacting with water. At ambient temperature, aluminum metal easily reacts with water to generate aluminum hydroxide and hydrogen. Typically, this reaction does not occur because a coating of aluminum oxide surrounds the raw metal, preventing it from coming into direct contact with water.

Aluminum-water hydrogen generation emits no greenhouse gases and has the potential to address the transportation problem in any area with sufficient water. Simply transport the aluminum and then react it on-site with water.

“Fundamentally, the aluminum becomes a mechanism for storing hydrogen — and a very effective one,” says Douglas P. Hart, professor of mechanical engineering at MIT. “Using aluminum as our source, we can ‘store’ hydrogen at a density that’s 10 times greater than if we just store it as a compressed gas.”

Aluminum has been unable to be used as a safe and cost-effective source of hydrogen generation due to two issues. The first issue is to ensure that the aluminum surface is clean and free of contaminants that could react with the water. To do this, a realistic system must first change the oxide layer and then prevent it from re-forming throughout the reaction.

The second issue is that pure aluminum is both energy- and resource-intensive to mine and produce, which means that any realistic system must incorporate scrap metal from a variety of sources. However, scrap aluminum is not a simple material to work with. It is frequently alloyed, which means that it has other elements that are added to modify the aluminum’s qualities or features for certain applications. For example, adding magnesium increases strength and resistance to corrosion; adding silicon reduces the melting point; and combining the two results in a fairly strong and corrosion-resistant alloy.

Despite extensive research on aluminum as a hydrogen source, two critical questions remain: How can an oxide layer on the aluminum surface be prevented from adhering, and how do the alloying elements in scrap aluminum affect the total amount of hydrogen generated and the rate at which it is generated?

Due to the lack of understanding of the fundamental processes in the reaction, it has been difficult to forecast the rate and amount of hydrogen formation from scrap aluminum, which can contain a variety of alloying metals in various proportions. As a result, Hart, Meroueh, and Thomas W. Eagar, a professor of materials engineering and engineering management in the MIT Department of Materials Science and Engineering, decided to investigate the effects of those alloying elements on the aluminum-water reaction and on a promising technique for preventing the formation of the interfering oxide layer in a systematic manner.

To prepare, they had Novelis Inc. scientists produce samples of pure aluminum and particular aluminum alloys composed of commercially pure aluminum plus either 0.6 percent silicon (by weight), 1% magnesium, or both – compositions representative of scrap aluminum from a range of sources. The MIT researchers used these samples to conduct a series of tests to investigate various elements of the aluminum-water reaction.

The first stage was to establish a method for penetrating the oxide layer that accumulates on aluminum in the air. Aluminum is composed of microscopic grains that are tightly packed together with occasional gaps where they do not line up exactly. To maximize hydrogen production, researchers would need to prevent the oxide layer from forming on all of those internal grain surfaces.

Numerous research organizations have already experimented with various methods for maintaining the aluminum granules’ “activation” for interaction with water. Some have crushed scrap samples to the point where the oxide coating is no longer adherent. However, aluminum powders are harmful because they can explode when exposed to moisture. Another strategy involves crushing scrap samples and using liquid metals to prevent oxide development. However, grinding is a time- and energy-consuming procedure.

According to Hart, Meroueh, and Eagar, the most promising strategy — pioneered by Jonathan Slocum ScD ’18 while working in Hart’s research group — included pre-treating solid aluminum with liquid metals and allowing them to permeate through grain boundaries.

To verify the efficacy of that method, the researchers sought to confirm that liquid metals could reach the interior grain surfaces both with and without alloying components. Additionally, they needed to determine the time required for the liquid metal to cover all of the grains with pure aluminum and its alloys.

They began by combining two metals — gallium and indium — in precise amounts to make a “eutectic” mixture, or one that remained liquid at ambient temperature. They applied the eutectic to their samples and allowed it to penetrate for 48 to 96 hours. They then submerged the samples in water for 250 minutes and observed the hydrogen yield (amount generated) and flow rate. They also used a high-magnification scanning electron microscope (SEM) to observe the borders between nearby aluminum grains after 48 hours.

The MIT researchers found that the gallium-indium eutectic did naturally permeate and reach the internal grain surfaces based on hydrogen yield measurements and SEM pictures. The rate and extent of penetration, on the other hand, varies according on the alloy. The penetration rate was identical in silicon-doped and pure aluminum samples, but was significantly slower in magnesium-doped samples.

The results from samples treated with silicon and magnesium — an aluminum alloy frequently found in recycling streams — were perhaps the most intriguing. Silicon and magnesium combine chemically to generate magnesium silicide, which accumulates on the interior grain surfaces as solid deposits. Meroueh postulated that when silicon and magnesium are present in scrap aluminum, they can act as barriers, impeding the movement of the gallium-indium eutectic.

Experiments and visual evidence corroborated her hypothesis: The solid deposits acted as barriers, and pictures of samples pre-treated for 48 hours revealed incomplete permeability. Clearly, a lengthy pretreatment step is necessary to maximize the hydrogen yield from aluminum scraps including silicon and magnesium.

Meroueh cites several benefits to the process they used. “You don’t have to apply any energy for the gallium-indium eutectic to work its magic on aluminum and get rid of that oxide layer,” she says. “Once you’ve activated your aluminum, you can drop it in water, and it’ll generate hydrogen — no energy input required.” Even better, the eutectic doesn’t chemically react with the aluminum. “It just physically moves around in between the grains,” she says. “At the end of the process, I could recover all of the gallium and indium I put in and use it again” — a valuable feature as gallium and (especially) indium are costly and in relatively short supply.

Following that, the researchers examined the effect of alloying elements on hydrogen formation. They analyzed samples that had been treated with the eutectic for 96 hours; at that point, the hydrogen yield and flow rates in all samples had stabilized.

Silicon at 0.6 percent boosted the hydrogen output for a given weight of aluminum by 20% when compared to pure aluminum — despite the fact that the silicon-containing sample had less aluminum. By comparison, the introduction of 1% magnesium created significantly less hydrogen, although the addition of both silicon and magnesium increased the yield, but not to that of pure aluminum.

Additionally, the inclusion of silicon enhanced the reaction rate significantly, resulting in a much larger peak in the flow rate but a shorter duration of hydrogen emission. Magnesium reduced the flow rate but allowed the hydrogen emission to remain rather constant over time. Furthermore, aluminum alloyed with both alloying elements yielded a flow rate comparable to magnesium-doped aluminum and pure aluminum.

These findings offer practical information on how to tailor hydrogen production to the operating requirements of a hydrogen-consuming device. If the starting material is economically pure aluminum, the hydrogen yield and flow rate can be tailored by adding small amounts of properly selected alloying elements. If the starting material is scrap aluminum, careful source selection may be critical. For high-intensity, quick bursts of hydrogen, scrap metal containing silicon from a car junkyard may work well. Magnesium-containing pieces from a demolished building’s frame may be preferable for lower but longer flows. Aluminum combining both silicon and magnesium should work well for outcomes in the middle; this material is commonly available from discarded cars and motorbikes, yachts, bicycle frames, and even smartphone covers.

It should also be possible to combine scraps of different aluminum alloys to tune the outcome, notes Meroueh. “If I have a sample of activated aluminum that contains just silicon and another sample that contains just magnesium, I can put them both into a container of water and let them react,” she says. “So I get the fast ramp-up in hydrogen production from the silicon and then the magnesium takes over and has that steady output.”

Another feasible method of affecting hydrogen production is to reduce the size of the aluminum grains, which would increase the overall surface area available for reactions.

The researchers investigated this strategy by requesting specifically modified samples from their supplier. The Novelis scientists first fed each sample through two rollers, squeezing it from the top and bottom to flatten the interior grains. The samples were then heated until the long, flat grains reformed and reduced to the desired size.

The MIT team discovered that lowering the grain size boosted the efficiency and lowered the duration of the reaction to differing degrees in various samples. Again, the presence of specific alloying elements significantly influenced the outcome.

The researchers experienced several unexpected results throughout their trials. For instance, conventional corrosion theory predicts that pure aluminum will generate more hydrogen than silicon-doped aluminum – the exact reverse of what the researchers observed in their trials.

Hart, Meroueh, and Eagar researched hydrogen “flow,” or the volume of hydrogen generated over time on each square centimeter of aluminum surface, including the inside grains, in order to give insight on the underlying chemical reactions. They tested three grain sizes for each of their four compositions and gathered thousands of data points for hydrogen flux measurements.

The researchers emphasize the need of gaining a thorough understanding of the underlying chemical interactions. Along with influencing the design of realistic systems, it may assist them in identifying a substitute for the costly indium in their pre-treatment combination. Gallium has also been demonstrated to spontaneously penetrate through the grain boundaries of aluminum in other research.

“At this point, we know that the indium in our eutectic is important, but we don’t really understand what it does, so we don’t know how to replace it,” says Hart.

However, Hart, Meroueh, and Eagar have already established two practical methods for modifying the hydrogen reaction rate: by incorporating particular elements into the aluminum and by altering the size of the internal aluminum grains. When combined, these approaches have the potential to provide considerable outcomes.