ZeroAvia and AGS Airports to bring hydrogen-fueled flights to Scotland

In order to enable zero-emission flights from Aberdeen and Glasgow airports, ZeroAvia made a deal with AGS Airports to investigate the development of hydrogen fuel infrastructure, regulatory framework needs, and resource requirements.

In order to evaluate the options for on-site hydrogen production as well as prospective commercial routes, the team at AGS, which owns and operates Aberdeen, Glasgow, and Southampton airports, will collaborate closely with ZeroAvia’s specialized airport infrastructure team.

By switching select routes to aircraft with the hydrogen-electric propulsion system developed by ZeroAvia, AGS Airports will be able to dramatically reduce Scope 3 carbon emissions from aircraft and lessen local noise and air quality impacts. AGS will investigate how hydrogen can be used to reduce emissions across ground operations at the same time to increase the impact.

At Cotswold Airport in Gloucestershire, ZeroAvia will discuss its expertise in creating and running the Hydrogen Airport Refueling Ecosystem (HARE). In order to demonstrate a flight powered by ZeroAvia’s ZA600 600kW hydrogen-electric engine, which is expected to be certified by 2025, the partners will work toward a flying demonstration. Glasgow, Scotland’s largest city, might soon see the emergence of commercial lines.

By the middle of the next decade, AGS Airports hopes to achieve net zero carbon emissions, and this agreement will play a significant role in that effort. The airport operator’s sustainability plan sets a market-leading goal for reducing the effects of aviation on the environment.

Within the next several years, zero-emission route aircraft will improve connections between Scotland’s major towns and isolated highland and island communities as well as to other UK regions. Operating more flights becomes appealing due to the lower operating costs and reduced noise profile provided by hydrogen-electric engines, which can hence promote regional economic growth. Glasgow already has aircraft that are relevant to ZeroAvia’s first commercial offering (the ZA600), and the AGS group may eventually add zero-emission flights to Aberdeen and Southampton.

The ZA600, which will soon undergo its first flight test in a 19-seat Dornier 228, is intended to propel aircraft with 9 to 19 seats up to 300 nautical miles. Since hydrogen-electric engines are the most practical, cost-effective, and far-reaching technology for lowering aviation’s impact on climate change and clean air, ZeroAvia’s objective is to integrate them into every aircraft. Hydrogen-electric engines produce only water as a byproduct by using hydrogen in fuel cells to create electricity, which is then utilized to drive electric motors that operate the airplane’s propellers. 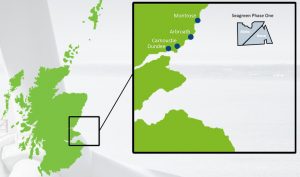