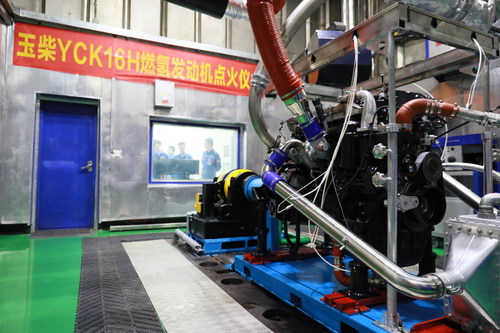 In Yulin, Guangxi, a Yuchai YCK16H hydrogen-fueled engine was successfully lit. The engine is the largest hydrogen-fueled engine with the highest volume and horsepower in China, with a displacement of 15.93 liters and a maximum horsepower of 560 hp. Yuchai has taken another significant step forward in the zero-carbon energy power system market with the successful ignition of YCK16H.

Yuchai Group Chairman and Secretary of the Party Committee Li Hanyang lit YCK16H. He claimed that the field of new energy engines has advanced quickly in recent years. As a producer of conventional engines, Yuchai has embraced clean energy engines, made advancements in clean energy engines, and supported China’s strategic goals of “carbon peaking and carbon neutrality” with Yuchai’s duty and dedication.

In order to achieve homogeneous combustion or stratified combustion in the cylinder as needed, the ignited YCK16H adopts advanced fuel high-pressure common-rail, high-pressure in-cylinder direct injection, and dual-channel turbocharging technology. This engine has improved power output, thermal efficiency, and stability. The platform has excellent fuel purity adaptability and is adaptable to fuels made from grey hydrogen, green hydrogen, hydrogen derived from methanol, and other sources. A highly adaptable, versatile, and controlled zero-carbon/low-carbon power system, the fuel supply may be flexibly blended in accordance with user demands and the fundamental fuel production, storage, and transportation circumstances. Yuchai chose the YC16H platform, which has a higher horsepower but is smaller and lighter than comparable products, to address the issue of the relatively low power per liter of hydrogen-fueled engines. This platform can be extensively used in scenarios like 49T tractors and other heavy commercial vehicles, as well as distributed energy sources.

The use of various alternative fuels places more demands on engine flexibility and dependability than other product platforms do. The YCK16H utilizes a high-efficiency air management system and an independently created intelligent control system that can achieve both lean and equivalent ratio combustion. It also has the ability to modify the air intake volume and injection fuel pressure to effectively play the part of various fuels. It uses sophisticated exhaust gas recirculation technology, electric-driven closed recirculation technology, and high-reliability fuel injection system technology to stop issues like problematic ignition and unstable combustion in ammonia-fueled internal combustion engines from happening. In order to lower the development costs for car manufacturers and better fulfill customer expectations, it uses intelligent variable control technology, which can convert various fuels by tweaking the fuel system and intelligent control software without changing the primary body of the engine.

One of the benefits of this engine architecture is the use of methanol and ammonia fuel. Ammonia fuel and methanol have less environmental effects than hydrogen and are easier to prepare store, and use than hydrogen. Based on the aforementioned benefits, internal combustion engines powered by methanol and ammonia have more potential for growth. The creation of the YCK16H paves the way for China to create internal combustion engines with zero carbon emissions by offering a solid technological framework for the use of ammonia or methanol as a single fuel, as well as ammonia-hydrogen and diesel-methanol blends.

According to reports, the YCK15N natural gas engine created using this platform has finished bench testing as well as vehicle road tests, and it’s anticipated to go into mass production by the end of 2022. According to the verification findings, YCK15N is more reliable, B10 achieves 1 million kilometers, and there is a 2.35-fold increase in the number of cylinder head low-cycle fatigue cycles. It uses the first EGR system in the sector and unique crankcase system anti-icing technology, and it can continue to run normally at -40°C. Due to the industry’s first adoption of TWC (three-way catalyst) + ASC (ammonia slip catalyst) + decarbonization technology, this product is cost-effective because its endurance mileage doubles, its lowest gas consumption is at least 5% lower than that of comparable products, and its torque is greater than that of comparable products. In 6X4 high-end tractors for trunk line logistics as well as standard-load composite tractors in plateau or hilly locations, this product will be widely employed.

Romania funds hydrogen, up to €50M per project