Hyundai considers pulling out of the hydrogen project in Switzerland

Hyundai is reportedly ending its fuel cell truck project in Switzerland, according to media sources. By 2025, Hyundai hoped to export 1,600 FC trucks to the Alpine country. At the end of 2020, the Korean company delivered the first units. Although “very changing energy prices” are reportedly to blame, Hyundai has refuted claims that the effort will be abandoned.

This was confirmed by Beat Hirschi, CEO of Hyundai Switzerland, to a Swiss business publication. The only program that will continue is the pay-per-use program for the 47 Hyundai Xcients that are currently on Swiss roads. The project’s unexpected conclusion had already been alluded to by people in line. It appears that Hyundai canceled contracts for trucks powered by hydrogen that was set to be delivered. Customers were given this explanation since there wasn’t any green hydrogen available.

Hyundai swiftly refuted the claim that the program will be terminated, stating succinctly: “Neither Hyundai nor any partner working in the hydrogen ecosystem in Switzerland intends to halt the existing project.” Although Hyundai acknowledges that the current green hydrogen delivery scenario is not ideal, this does not appear to be affecting their long-term plans: “The availability and pricing of power from sustainable energy sources are impacted by the unforeseen disturbance in the energy market. This includes the short- and long-term expenditures associated with producing green hydrogen. However, all the participants in the Swiss hydrogen ecosystem are steadfastly committed to their plans to advance and create remedies to change the system as a whole.

Due to the fact that “eleven publicly accessible filling stations presently supply green hydrogen, and three more locations are due to commence operations,” the South Korean company anticipates that the hydrogen filling station and production concerns will be rectified quickly.

In my realm of offshore wind and hydrogen, things are occurring in Latin America under the leadership of Ceara and Acu. As Brazil’s environmental protection agency Ibama in August announced an astounding 169GW in proposed offshore wind projects seeking approval of the country’s nearly 8,000km of coast, I frequently shared updates with the community and integrated them here.

Shizen Energy of Japan is the most recent company to apply for environmental licenses, joining industry heavyweights Equinor, Shell, and TotalEnergies, as well as the joint venture Ocean Winds between Engie and EDPR, Iberdrola, and Macquarie’s Corio Generation.

In a decree issued in January, Brazil’s federal government established the first rules for offshore wind, dividing up planning and permitting responsibilities among nine separate governmental entities in the region’s largest economy.

Latin American green hydrogen initiatives will be supported by offshore wind capacity for both domestic and international energy usage. According to the analyst, by 2050, Brazil would account for over 6% of the global supply of green hydrogen, with the market expanding after 2030.

By 2050, it is anticipated that Latin America will have 34GW of offshore wind capacity, headed by regional leaders Brazil and Colombia and fueled by an increase in off-grid green hydrogen projects.

The next-generation hydrogen electrolyzer prototype from Oort will be tested as a result of this collaboration, which will build on existing green hydrogen pilot projects.

The business wrote on its Twitter account: “Access to large-scale competitive electrolyzer capacity will be important to the long-term viability of green hydrogen projects and the deployment of the pilot projects will validate the technology.”

In collaboration with Chariot, Oort may be able to test the prototype in an industrial setting to show off its capabilities and evaluate its effectiveness, viability, and affordability for use in large-scale projects. source.

A public hydrogen fueling and electric vehicle charging station made specifically for trucks have opened in the Swedish port city of Gothenburg.

The Circle K charging and hydrogen filling station is now accessible. It is the first of its sort in the Nordic region and was constructed from the standpoint of heavy trucks with the goal of easing the transition to green for heavy cargo traffic in and around the Port of Gothenburg.

The station will create a new port hub to make it easier to switch large freight traffic from fossil fuels to electricity and alternative energy. There will initially be six public charging bays for heavy-duty electric trucks, each with a 360 kW maximum output. Numerous charging stations close together not only improve capacity but also reduce wait times. At the station, hydrogen will be available in a year.

At the Port of Gothenburg, more than 1 million large trucks receive or transport cargo every year. Together with Volvo Group, Scania, and Stena Line as part of the cooperative program Tranzero, the port studied the driving habits of heavy trucks. Large numbers of big vehicles have been identified as being especially well suited for the current fossil-free transition, and a public station for hydrogen and charging in the center of the port will be a crucial facilitator. 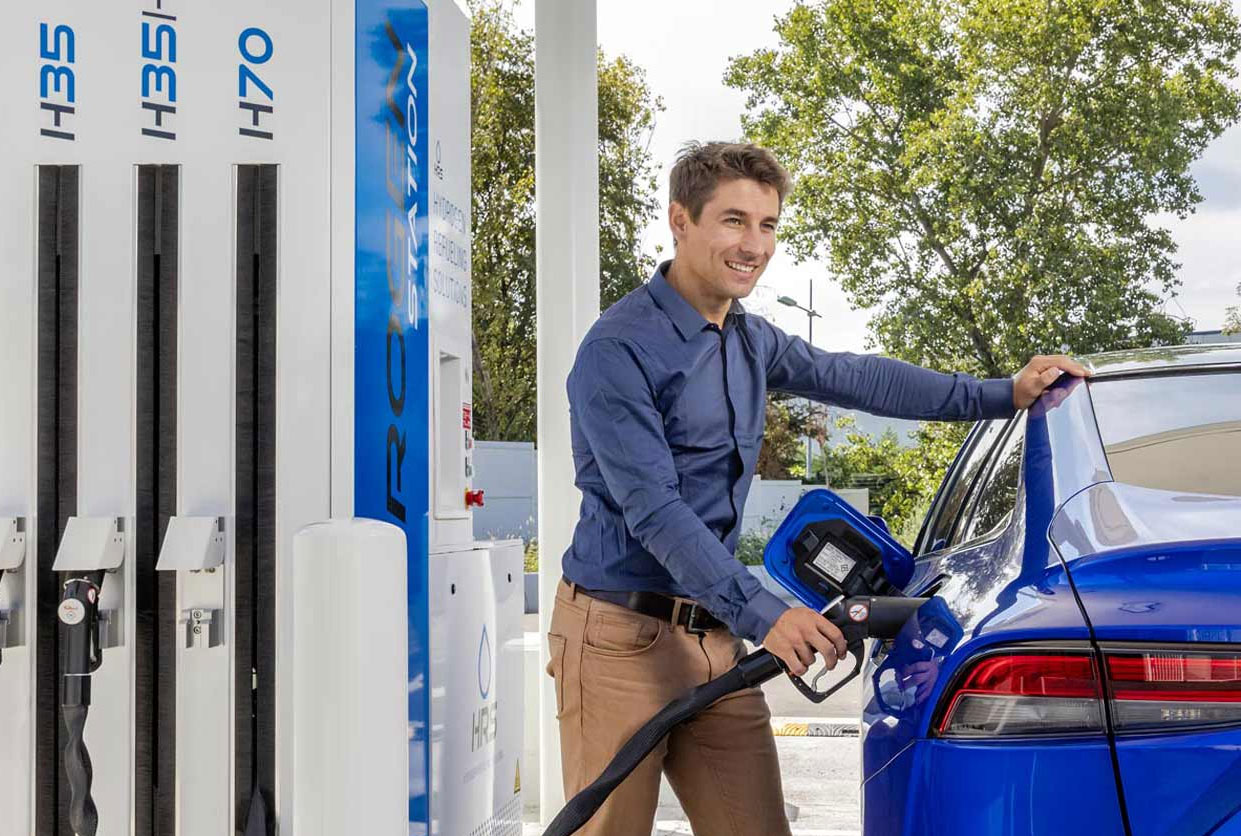 The renowned designer Philippe Starck has partnered with the French HRS to aesthetically improve its stations.

The partnership with Philippe Starck, which was unveiled as part of the Paris Motor Show, intends to add fresh lines to the HRS station lineup. For the maker, it is a matter of putting forth a design that is more suited to the architectural restrictions, particularly in the center of cities where aesthetics factor into community selection more and more.

“Through this relationship, HRS hopes to increase the allure of its solutions by fusing superiority in business, technology, and design. gives a brief press release that summarizes the company. The company has not yet announced a release date for the initial HRS by Starck station.

The final purchase agreement for 200 acres of land to be used for the Valley Link rail project with the City of Tracy has been approved by the board of directors of the Tri-Valley-San Joaquin Valley Regional Rail Authority.

This comes after the Authority approved the project’s Hydrogen Production Feasibility Study in September. The Authority’s vision of sustainability for the Valley Link rail project is to be the first passenger rail system in California to run on self-produced, green hydrogen, with a hydrogen fuel production facility able to support the clean energy goals of other transit and heavy truck operators. This property offers the crucial land area required to implement a green hydrogen production facility.

Tens of thousands of Bay Area workers who currently commute daily from their homes in some of the state’s most underprivileged communities located in one of the most polluted air basins in the country will be connected by the 26-mile Valley Link Rail Project Phase 1 between the Dublin/Pleasanton Bay Area Rapid Transit (BART) station in Alameda County and the Mountain House station in San Joaquin County.

The Valley Link rail project is being implemented by the Authority as a sustainable model that can run on self-generated renewable energy, support transit-oriented land use development near station areas, and foster innovation in station access while maximizing benefits for air quality, equity, health, and workforce.