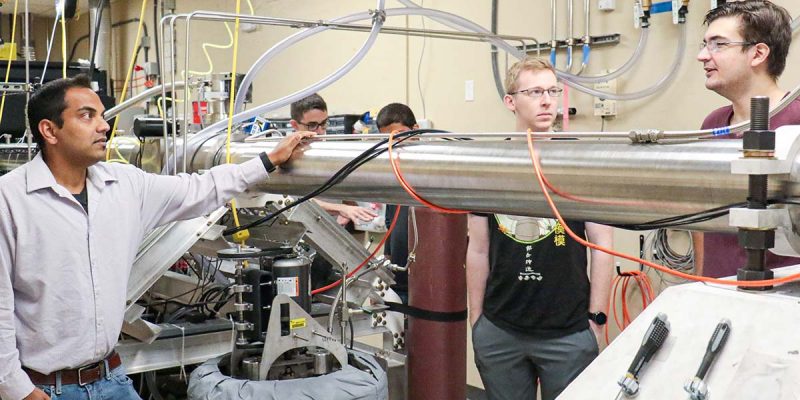 With a new $800,000 grant from the US Department of Energy to enhance hydrogen fuel research, the University of Central Florida is helping to lead the country’s effort to achieve 100 percent clean electricity by 2035.

The grant is part of a nearly $6.2 million award from the DOE’s Office of Fossil Energy and Carbon Management’s University Turbine Systems Research program to seven universities for research and development projects aimed at making hydrogen a high-performing, efficient gas for turbine-based electricity generation.

The study is significant because employing carbon-free, clean-burning fuels like hydrogen will provide an alternative to carbon-based fuels, which emit greenhouse gases and contribute to climate change. Hydrogen is the most plentiful element in the universe, and it may be made from a variety of sources. Water is the only combustion byproduct.

President Joe Biden of the United States has set the goal of developing a carbon-free power sector by 2035 and a net-zero-emissions economy by 2050. Hydrogen fuel technology may play a key role in achieving such objectives.

In a statement announcing the awards, Secretary of Energy Jennifer M. Granholm said, “Part of our path to a net-zero carbon future means investing in innovation to make clean energy sources like hydrogen more affordable and widely adopted so we can reach our goal of net-zero carbon emissions by 2050.” “These projects will get us closer to realizing the scientific breakthroughs required to build a strong domestic supply chain and high-paying jobs in the emerging clean hydrogen industry.”

China and Japan are also investing billions of dollars in the race to develop hydrogen combustion turbine technology, alongside the United States and the European Union.

The goal of UCF’s initiative is to learn more about how to use hydrogen in modern electricity-generating turbines, including the optimal fuel blends and combustion characteristics.

“The high reactiveness of hydrogen makes it difficult to use hydrogen blended fuels on existing infrastructure, and it also increases the risk of nitrogen oxide generation in the exhaust,” says Subith Vasu, a professor in UCF’s Mechanical and Aerospace Engineering department. “As a result, our team is using our unique experimental facilities to investigate vital, fundamental characteristics of hydrogen fuel combustion and will develop high-fidelity computer models to support the design and development of next-generation hydrogen combustors to make a carbon-free society a reality.”

Artem Masunov, an associate professor in the NanoScience Technology Center and Department of Chemistry at UCF, is a co-investigator on the study. Raghu Kancherla, a postdoctoral researcher in Vasu’s group, will also contribute to this endeavor.

“We are ecstatic that the DOE has chosen us to conduct this study because we have a track record of collaborating closely with industry to develop innovative gas turbine technologies,” Vasu says.

The DOE picked Center for Advanced Turbomachinery and Energy Research Director and Pegasus Professor Jayanta Kapat to study hydrogen storage as part of a $500,000 award earlier this year, demonstrating UCF’s growing expertise in hydrogen research. The grant will be used to fund research into the viability of a revolutionary hydrogen storage technology known as a Cryogenic Flux Capacitor.

“Hydrogen is critical in global decarbonization efforts, and despite stiff competition from other universities, these two DOE awards demonstrate that UCF CATER researchers are well-positioned to lead hydrogen to decarbonization in all sectors, including power generation, aviation, industry, and space,” says Kapat.

Vasu graduated from Stanford University with a doctorate in mechanical engineering and joined UCF’s Department of Mechanical and Aerospace Engineering, which is part of the College of Engineering and Computer Science, in 2012. He is a member of the University of Central Florida’s Center for Advanced Turbomachinery and Energy Research, a fellow of the American Institute of Aeronautics and Astronautics, and a member of the International Energy Agency’s Task Team on Energy. Vasu has won the DARPA Director’s Fellowship, the DARPA Young Faculty award, the Defense Threat Reduction Agency’s Young Investigator grant, the American Chemical Society’s Doctoral New Investigator award, the American Society of Mechanical Engineers’ Dilip Ballal Early Career award, and the Society of Automotive Engineers’ SAE Ralph R. Teetor Educational award. Many of UCF’s top honors have been bestowed upon him, including the UCF Luminary and Reach for the Stars awards.